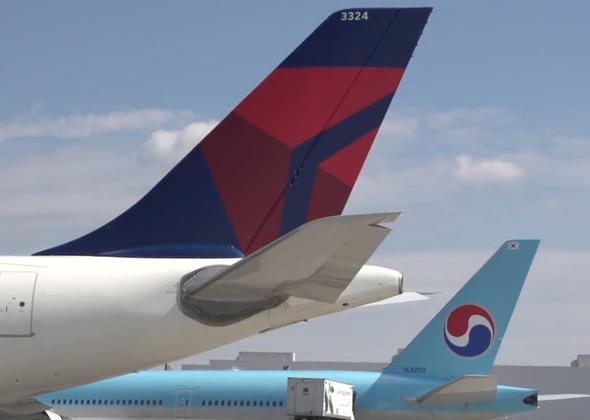 Delta Air Lines and Korean Air will launch a new joint venture partnership that will offer customers world-class travel benefits across one of the most comprehensive route networks in the trans-Pacific market.

The joint venture has now been approved by regulatory authorities in the U.S. and Korea, including the U.S. Department of Transportation and the Korean Ministry of Land, Infrastructure and Transport.

“This is an exciting time for customers of both Delta and Korean Air as we launch our trans-Pacific partnership,” said Delta CEO Ed Bastian. “Our expanded partnership means a host of new destinations and travel options across Asia and North America, with seamless connectivity, world-class reliability and the industry’s best customer service.”

“We are delighted to announce the launch of our partnership with Delta. This partnership will bring more comfort to customers flying between Asia and the Americas,” said Mr. Yang Ho Cho, Chairman and CEO of Korean Air. “With the recent relocation to Terminal 2 at Incheon Airport alongside with Delta, we will be able to provide seamless service to our customers. Korean Air will provide extensive support to develop a successful partnership with Delta.”

The expansive combined network formed by this partnership gives Delta and Korean Air’s shared customers seamless access to more than 290 destinations in the Americas and more than 80 in Asia.

The airlines will work closely together to bring customers the full benefits of the partnership, including joint growth in the trans-Pacific market, optimized schedules, a more seamless customer experience, improved loyalty program benefits, integrated IT systems, joint sales and marketing activities, and co-location at key hubs.

The new joint venture builds on nearly two decades of close partnership between Korean Air and Delta; both were founding members of the SkyTeam alliance and have offered customers an expanded codeshare network since 2016.

Earlier this year, Delta and Korean Air co-located into the new, state-of-the-art Terminal 2 at Seoul’s Incheon International Airport (ICN), substantially reducing connecting times for customers. One of the world’s largest airports, ICN has among the fastest connection times in the region. It has been named among the best airports in the world for more than a decade by Airports Council International, as well as the world's cleanest airport and the world's best international transit airport by Skytrax.

Delta anticipates that Seoul Incheon will continue to grow as a major Asia gateway for Delta and Korean Air. Delta is the only U.S. carrier to offer nonstop service to three major U.S. gateways, including Seattle, Detroit and Atlanta from ICN, while Korean Air is the largest trans-Pacific carrier. 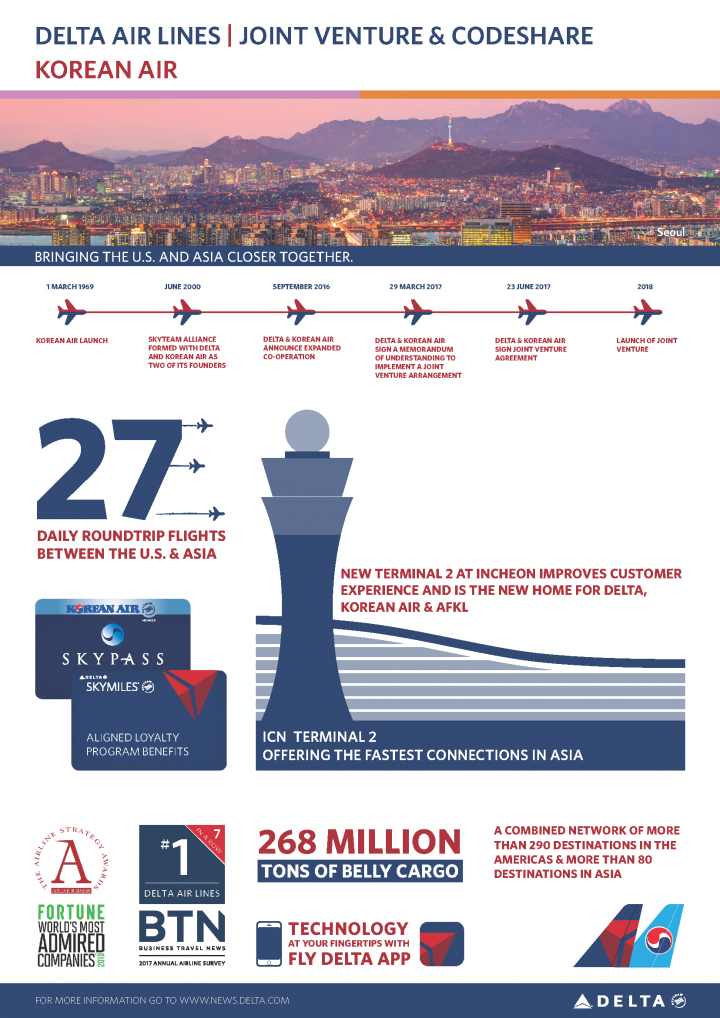 Delta Air Lines serves more than 180 million customers each year. In 2017, Delta was named to Fortune’s top 50 Most Admired Companies in addition to being named the most admired airline for the sixth time in seven years. Fast Company also named Delta among its most innovative companies in 2018. With an industry-leading global network, Delta and the Delta Connection carriers offer service to 314 destinations in 54 countries on six continents. Headquartered in Atlanta, Delta employs more than 80,000 employees worldwide and operates a mainline fleet of more than 800 aircraft. Including its worldwide alliance partners, Delta offers customers more than 15,000 daily flights. Additional information is available on the Delta News Hub, as well as www.delta.com, Twitter @DeltaNewsHub, Google.com/+Delta, and Facebook.com/Delta.

Korean Air is one of the world's top 20 airlines and carried more than 26 million passengers in 2016. Korean Air operates over 460 flights per day to 123 cities in 43 countries on six continents with a fleet of 169 aircraft. With its modern aircraft and over 20,000 professional employees, Korean Air offers customers convenience and comfort. Korean Air’s award-winning offerings of Korean and international meals and state-of-the-art inflight entertainment system provide passengers with a memorable inflight experience.  The airline is a founding member of the Sky Team airline alliance, which together with its 20 members, offers its 612 million annual passengers a worldwide system of more than 16,320 daily flights covering 1,052 destinations in 177 countries.  More on Korean Air's programs, routes, frequencies and partners is available at www.koreanair.com