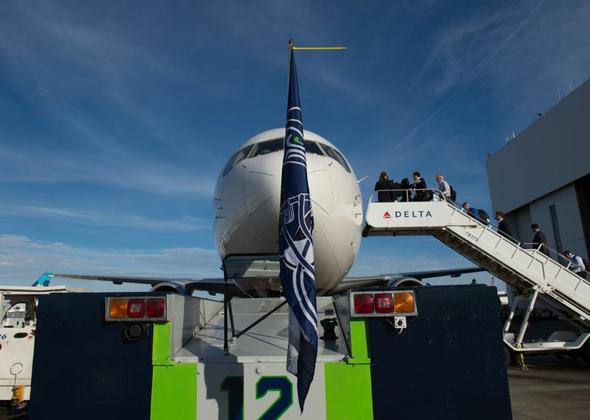 SEATTLE - The city’s global airline and its premier sports franchise will continue partnering to enhance the fan experience with the continuation of Delta as the Official Airline of the Seattle Seahawks. The Seahawks will continue to charter Delta for every road game.

“We are pleased to extend our partnership with Delta Air Lines,” said Seahawks President Peter McLoughlin. “Together we are aligned to deliver exceptional services to our fans at CenturyLink Field and in the Delta Sky360 Club Level.”

“From enhancing the fan experience at the Delta Sky360 Club, to flying the Seahawks to away games, and everything in between, three years of partnership has flown by,” said Mike Medeiros, Delta's Vice President - Seattle. “As the Official Airline of the Seahawks, we look forward to supporting our Hawks and the 12s both at the airport and on the field for many years to come.”

As part of the partnership extension, the Seahawks rebranded their five-state, 48 station radio network the Delta Air Lines Radio Network. Steve Raible and Warren Moon call the action with Jen Mueller as sideline reporter every game during the preseason and regular season.

Delta is also giving fans and a guest the opportunity to win a trip to see the Seahawks play at every road game. Fans may enter throughout the season at www.seahawks.com/delta or in the Delta Sky360 Club level during home games at CenturyLink Field.