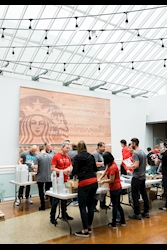 In honor of Military Appreciation Month, Delta and Starbucks joined together to prepare care packages for active military members and their families traveling to Asia in partnership with USO Northwest.

More than 50 Seattle-based employee volunteers from both organizations filled more than 1,000 boxes with Biscoff cookies, KIND bars, chocolates, and mints, as well as kids' activity books, Billboard earbuds, Starbucks reusable cups, and Via coffee packets for military members and their families. Each care package also included a personalized notecard with a message of support and gratitude for their service.

"When you're serving overseas, receiving a care package is the best feeling in the world," said volunteer Jenna Galhenage, a Seattle-based employee and former Personnel Officer in the U.S. Air Force. "It reminds you what you're fighting for and what you get to come home to. It really is like Christmas morning." 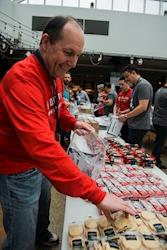 Both Delta and Starbucks uphold the value of community in their missions, and supporting members of the military is one of Delta's key pillars of community support.  The partnership with the USO is aimed at uplifting the spirits of the troops and their families and is one of many efforts to show support and honor members of the military. Delta's other partnerships include the Congressional Medal of Honor Foundation, Luke's Wings, Fisher House, Marine Toys for Tots, the Freedom Center in Detroit, and the Armed Forces Center in Minneapolis-St. Paul.

May's celebration of Military Appreciation Month collectively pays tribute to past and present members of the U.S. Armed Forces, their spouses, and families. Americans are reminded throughout the month of the military's hand in impacting U.S. history with holidays like Memorial Day, Armed Forces Day, and Military Spouse Appreciation Day.