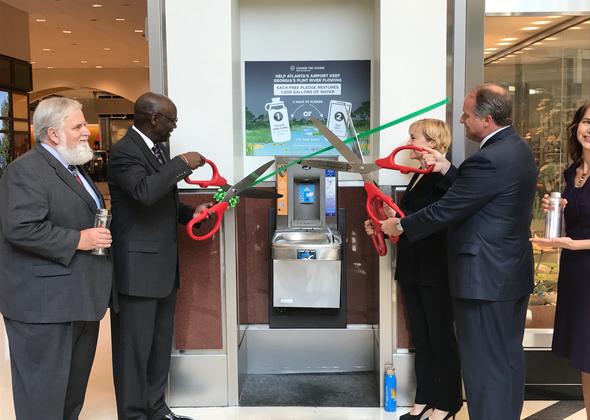 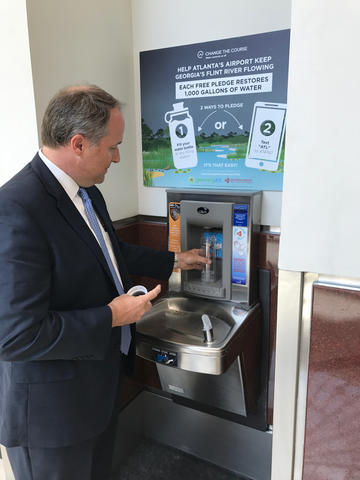 A river runs underneath the world’s busiest airport. Now Delta and Hartsfield-Jackson Atlanta International Airport (ATL) are giving customers and employees traversing ATL an opportunity to contribute to its conservation, and the conservation of waterways nationwide.

Today, Delta announced a year-long partnership with the world’s busiest airport to support Bonneville Environmental Foundation’s Change the Course, a freshwater conservation and restoration initiative. While Delta’s sponsorship contribution will directly impact the Flint River that flows beneath ATL, customers and employees can replenish waterways across North America by simply texting the word “Delta” to 474747, or by refilling a reusable water bottle at water filling stations in Delta terminals. Change the Course restores 1,000 gallons of water for every text received and bottle filled. The partnership aims to restore approximately 30 million gallons of water over the next year.

“Conserving water is something we all can and should play a role in,” said John Laughter, Delta’s Senior Vice President — Corporate Safety, Security and Compliance. “This partnership with our hometown airport, the world’s busiest, directly supports a key water source in the region while giving employees and customers traveling through ATL from around the world, a tangible way to play a role in replenishing water sources across North America.”

Delta’s support of Change the Course is part of the airline’s commitment to give back 1 percent of its net income to support environmental, social and governance efforts in the communities where employees live and work. Last year, Delta was the only airline named to the annual Dow Jones Sustainability North America Index, marking the sixth consecutive year the airline has been awarded the distinction.

Change the Course is a first-of-its-kind initiative that engages the business community and the public in reducing water footprints and returning water to nature. Corporate sponsors fund innovative projects that restore water and enhance water security. For every personal pledge to conserve, Change the Course returns 1,000 gallons to freshwater systems in need. Delta’s partnership with its hometown airport will directly benefit Georgia’s Flint River, a 344-mile river with headwaters running under Hartsfield-Jackson.

Georgia’s rivers provide drinking water for millions and supply farms, cities and businesses across the state. These freshwater ecosystems are home to some of the greatest aquatic biodiversity in North America. However, pressures like drought, pollution and population growth have stressed rivers and freshwater supplies, putting natural ecosystems and local economies at risk. Change the Course fosters the innovation, partnership and stewardship that are needed to sustain the water supply and improve water quality.

Delta and Hartsfield-Jackson’s support of Change the Course will go toward the Flint River Water Stewardship project, which provides funding, outreach and technical support to modernize irrigation systems, maximize crop production, reduce water use and restore flows in important areas throughout the lower Flint River Basin.