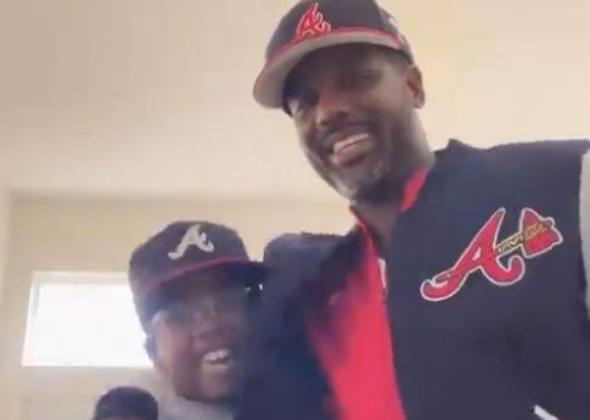 Download
A father and son – die hard, “faraway” Atlanta Braves fans – are just two of the fans that are World Series bound, thanks to Delta and the Braves.
DELTA NEWS ON THE GO. Subscribe and follow.

Delta is the Official Airline of the Atlanta Braves. For years, the team has flown the airline’s charters to away games. Now, a father and son – die hard, “faraway” Braves fans – are World Series bound, thanks to Delta and the Braves. They’re two of several fans getting tickets to fly and take in the postseason games.

Atlanta TV station WXIA reports that Jason Caine, a pastor in Sacramento, posted his excitement for the Braves postseason run on social media. Delta and the Braves noticed and surprised the committed fan and his son with flights and tickets to Game 4 in Atlanta.

WXIA | An Instagram post caught the attention of Delta Air Lines and the Braves. Now a father and son are headed to a World Series game.

“I said I’ve been a fan since I was 10 when they won the World Series,” Caine told WXIA, recounting the social media video. “If they win again this year, my son will be 10 and the Braves hit me up and said we have free tickets for you.”

“I thought my dad was trying to prank me or something,” Caine’s son, also Jason, said.

“Throughout the postseason, we’ve surprised-and-delighted Braves fans on social with flights and game tickets to cheer on their fav team in person,” Andrea Feminella, Delta Manager of Audience Engagement told WXIA. “To celebrate the Braves getting into the World Series, we did another surprise-and-delight. This time, we had the Braves post on Twitter and Instagram, asking their followers to explain why they’re die-hard Braves fans. We gave three faraway fans each a pair of round-trip flights and tickets to Game 4 in Atlanta. We also surprised two fans in ATL with a pair of round-trip flights and tickets to go on the road for Game 2 in Houston.”

Caine and his son weren’t the only fans caught up in the moments made possible by Delta and the Braves.

“It just means to world to me to be able to take him to the game,” Caine said. “I’m just excited about it.”

“There are fans out there who have been waiting their whole lives for this moment, so it was the perfect time for Delta to bring Braves Country to the Braves,” Feminella said. 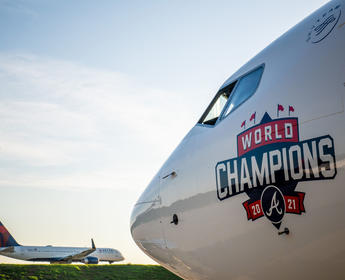