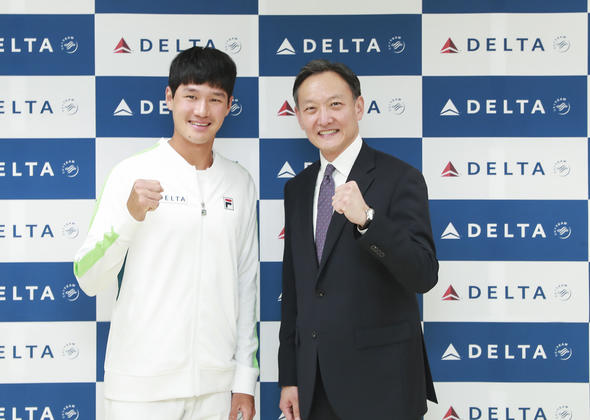 Download
Delta has become the official airline for Soonwoo Kwon, a top-ranking professional tennis player, supporting his travel needs between Delta’s Asia Hub at Incheon Airport in Seoul and the U.S.
DELTA NEWS ON THE GO. Subscribe and follow.

Delta has become the official airline for Soonwoo Kwon, a top-ranking professional tennis player, supporting his travel needs between Delta’s Asia Hub at Incheon Airport in Seoul and the U.S. Kwon will promote Delta's network and services as a brand ambassador in Korea until March 31, 2023.

During the contract period, Mr. Kwon will wear the Delta logo on his attire during games and appear in Delta's digital advertisements and social media posts. He will also attend Delta's events as our brand ambassador.

"Delta has been supporting promising young Korean athletes who compete globally and play a key role in connecting Korea and the U.S.," said Andrew Kim, Delta's Director - Korea. "Mr. Kwon is the ideal ambassador for Delta as our mission is to connect the world, and we are committed to ‘Keep Climbing.’ We support his participation in tennis tournaments in Korea and the U.S. and will keep climbing together."

As the leading global airline, Delta's mission is to create opportunities, foster understanding, and expand horizons by connecting people and communities and their potential.

To celebrate being the official airline for Kwon, Delta will run a special campaign through its Kakaotalk account from April 1-15. Fans who leave a cheering message will have a chance to win tennis goods signed by Kwon, including one jacket, two T-shirts, three hats and 15 pairs of limited-edition tennis balls. For further details, please visit Delta’s Kakaotalk.

Kwon became a professional tennis player in 2015 and has been No. 1 in the KTA singles ranking since May 2019. In September 2021, he captured his first ATP Championship at the Astana Open, the first time a Korean player won an ATP tournament since 2003. Kwon is currently ranked No. 52 in the ATP singles ranking, the second highest-ranked Asian player.