A 14-foot-tall Delta widget hoisted atop the main scoreboard at Yankee Stadium today is the first piece of the full Delta signage that will appear permanently in the outfield when installation is complete in March. The new branding is a signature component of the airline’s eight-year extension as the Official Airline of the New York Yankees and its Private Jet Carrier through the 2023 season. 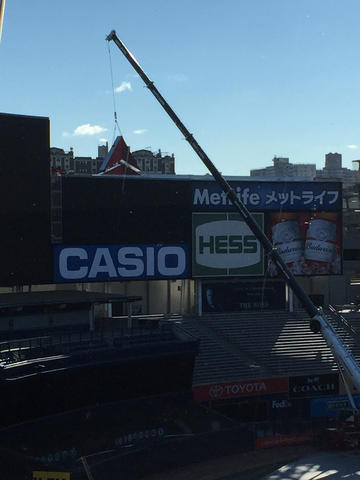 The New York Post covered the announcement in an exclusive story that published earlier this morning.

“This prominent, permanent signage is a testament to our support of and dedication to this great team and its amazing fans, including so many of our loyal New York customers and our more than 10,000 New York-based employees,” said Gail Grimmett, Delta’s Senior Vice President – New York. “We’re not just in the business of being New York’s number one airline; we’re a reliable partner on the ground and in the air.”

Delta has been the team’s official carrier since 2008 and has flown the team nearly 300,000 miles during that time. Through its newest agreement with the New York Yankees, Delta will also maintain its signature Delta SKY360° Suite, a premium seating area and club lounge located behind home plate.

“We have had a remarkable mutually successful partnership with Delta,” said Michael J. Tusiani, New York Yankees Senior Vice President of Corporate Sales and Sponsorships. “Adding ‘Delta’ on top of the Yankee Stadium scoreboard, a vastly-recognizable signage position, as part of our extension deal, is a tribute to and recognition of the continuation of Delta’s strong consumer loyalty and brand equity which Delta has achieved, especially in New York. The illuminated sign will be visible to all fans during every event and private gathering in the stadium, such as the New Era Pinstripe Bowl and other college football games, NYCFC matches, trade shows and press events.”

Under its sponsorship agreement, additional Delta branding will be prominent at Yankee Stadium through home-plate, baseline rotational and LED signage; a daily in-game scoreboard feature; and Yankees print publications. Delta will participate in hospitality events and promotions for fans during both spring training and the regular season. The airline will also host events with current players and alumni at New York Yankees Steakhouse.