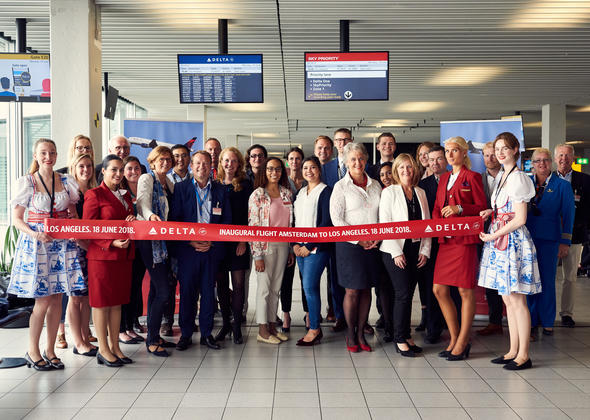 With the addition of nonstop flights from Los Angeles to Paris-Charles de Gaulle and Amsterdam-Schiphol airports, Delta has linked all its U.S. hubs to its two largest hubs in Europe.

The new year-round flights from L.A. to Paris will operate three times weekly, while flights to Amsterdam will operate on four days. Customers flying via both European hubs will have access to destinations across Europe, the Middle East, India, Africa and Asia thanks to Delta’s partner airline network offered by Air France, KLM, Alitalia and Jet Airways.

“The start of our new Los Angeles nonstop services to both Paris and Amsterdam, offers our customers even more nonstop choice on Delta to its key European hubs,” said Dwight James, Delta’s Senior Vice President — trans-Atlantic.

Delta operates more than 170 daily flights and connects more passengers to its partner airlines via Los Angeles than anywhere else in the United States. The airline is investing in the airport through a $1.86 billion plan to modernize, upgrade and connect Terminals 2, 3, and the Tom Bradley International Terminal.

For customers flying from Europe to the U.S., the Los Angeles route is responding to increased demand for travel to the West Coast. Last year, visitor numbers to California from France and the Netherlands were up 15 percent and the new flights will offer more travel options.

Delta has already boosted flights to Paris and Amsterdam this summer. The airline added a nonstop from Orlando to Amsterdam in March, while a service from Indianapolis to Paris launched in May. Delta remains the largest carrier across the Atlantic and this summer will operate 176 flights a day to 32 destinations across the region.