CINCINNATI - More than 200 Delta and community volunteers traveled to the Mt. Auburn historic neighborhood in downtown Cincinnati Friday to build another KaBOOM! playground in a local Delta community. 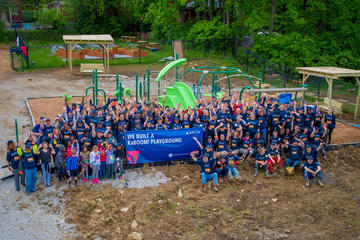 The playground was built for Mt. Auburn International Academy, a tuition-free public charter school that provides an academically challenging program in a safe, structured environment to kids Pre-K to grade 12. It is the 18th playground built by Delta and the first in the Cincinnati area.

The 2,500 square foot space creates a place to play for more than 800 kids who attend the school and live in the neighborhood, which is located near the Cincinnati/Northern Kentucky International Airport.

Despite several days of torrential rain in Cincinnati prior to build day, the dedicated volunteers were able to complete the project in just six hours. Cincinnati employees from Airport Customer Service and Reservations volunteered their time to participate in the build in addition to Delta people who traveled from Atlanta, Minneapolis-St. Paul, Nashville, New York City, Seattle and other locations to volunteer.

“This is my 18th KaBOOM! build with Delta – I love giving back,” said Shawn Van-Tull, ACS Seattle.  “I have two kids of my own in New York, and knowing there are playgrounds built so kids across the country can play is why I decided to do my part and help out in the community.”

Project teams were created from Delta, KaBOOM! and Mt. Auburn to move and construct playground equipment weighing 5,390 lbs., mix and pour 23,920 lbs. of concrete and shovel and spread 140 cubic yards of mulch to transform an empty area of the school property into a haven for safe play.  In addition to building the handicapped-accessible playground, teams built benches and planters as well as installing pavers to make the playground more inviting to students and families in the community. 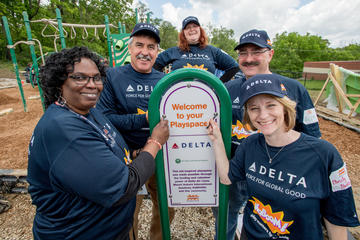 “This playground is going to reach students in areas we least expect. It’s going to have some lasting memories for these children,” said school director Claudia Ehrle.  “Sometimes we don’t know what they go through, and having a place where they can play and feel free, and get away from their problems is important. I just want to thank Delta for doing this for our students – it’s simply amazing and I can’t wait to see their faces.”

As part of the ceremonies, Delta presented the school a surprise check for $20,000 to support the overall long-term maintenance commitment to the playground.

“Cincinnati has always been a very important market for Delta,” said CVG Station Manager Christy Blackburn at the event. “And not only that, but our employees live here, work here, serve here – and it’s very important for us to also give back to the community that supports us.”

“We’ve had a great day today building a playground. It started in a world of mud and will be providing a world of play,” said Amy Schwarber, Director – Customer Engagement Center, CVG. “It’s great to work for a company that one of its core values is to serve the communities where we live and work. It’s been a great experience and it’s one you can’t imagine until you’re actually out here doing it.” 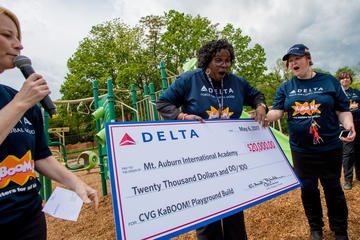 The Ribbon Cutting ceremony brought to a close months of planning, which included the participation of the kids themselves.

In March, students from the school met with Delta employees to plan for their dream playground. The "Design Day" gave kids the opportunity to talk to Delta and KaBOOM! about what they would like to see in their new playground. The features and equipment for the playground were ultimately selected using many of the kids' ideas and drawings.

KaBOOM! is the national nonprofit dedicated to giving all kids – particularly those growing up in poverty in America – the childhood they deserve filled with balanced and active play so they can thrive.