More than 200 volunteers from Delta, KaBOOM! and the Seattle community braved record-breaking heat to build a new playground for the Boys and Girls Club of King County – Rotary branch. The playground marked Delta’s 15th KaBOOM! build and the airline’s fourth playground in Seattle. 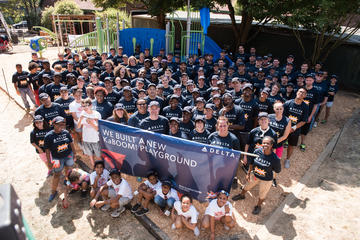 Volunteers – including more than 80 Seattle-based employees as well as employees from Atlanta,  Los Angeles, New Orleans, Tampa and West Palm Beach  – spent the day assembling the new playground, planters, picnic tables and more – all of which was finished in just six hours.

"Partnership means caring for our communities,” said Mike Medeiros, Delta’s Vice President–Seattle. “Four years and four playgrounds later, our people are more excited than ever to give the kids of the Boys & Girls Club the childhood memories they deserve through another KaBOOM! playground build." 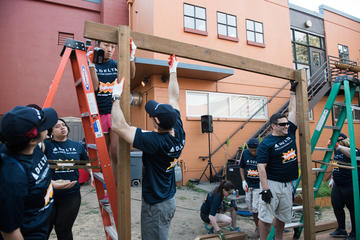 KaBOOM! and Delta hosted a design day earlier in the summer, during which Rotary Boys & Girls Club kids were encouraged to draw their dream playgrounds. Some of the final playground elements were based on their suggestions.

Rotary Boys & Girls Club operates within Boys & Girls Clubs of King County. The organization’s mission is to enable all young people, especially those who need us most, to realize their full potential as productive, caring, responsible citizens. The Rotary Club serves more than 500 youth annually with drop-in programs and structured athletics, providing a safe and positive environment, including strong role models, free snacks and meals, intentional activities and supportive adults. 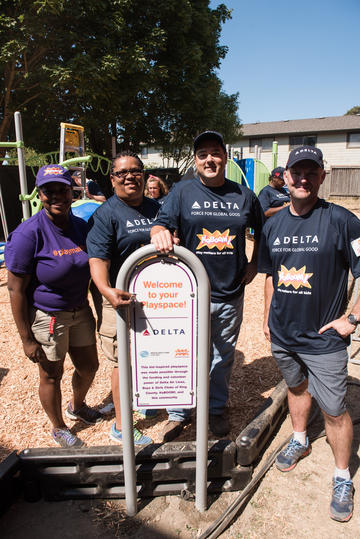 “Keeping kids healthy is core to our mission, but our Club was sorely missing a safe outdoor space,” said Patrick Carter, Executive Director of the Rotary Boys & Girls Club. Designed and built with the community, for the community, in the heart of Seattle’s Central District, this beautiful new playground will keep hundreds of youth active for years to come. We are immensely grateful for Delta’s support – both in terms of the financial contribution and incredible volunteer support, at our Rotary Boys & Girls Club.”

KaBOOM! is the national non-profit dedicated to giving all kids – particularly those growing up in poverty in America – the childhood they deserve filled with balanced and active play. Since 1996, KaBOOM! has collaborated with partners to build, open or improve nearly 16,300 playgrounds, engaged more than one million volunteers and served 8.1 million kids.