Not even 95-degree temperatures could wilt the enthusiasm of the more than 200 volunteers from Delta, KaBOOM! and the Morrisania community of New York City’s South Bronx on Saturday, all whom joined forces to build a new playground for local arts organization DreamYard Project. The playground marked the 13th such build in partnership between Delta and KaBOOM! – and, notably, the first one in New York. 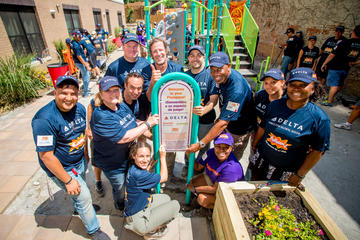 DreamYard collaborates with Bronx youth, families and schools to build pathways to opportunity through the arts. The DreamYard Art Center provides free, nationally recognized, after-school and Saturday programming to hundreds of young people every year – but until this weekend, it didn’t have a playground. When the concrete dries, the kids of the surrounding community will have a brand-new, accessible and safe place to play.

Volunteers – including most of Delta’s New York leadership team along with employees from New York-John F. Kennedy International Airport and New York-LaGaurdia Airport – spent the day assembling the new playground, planters, bike racks, and more – all of which was finished in just six hours.

“Delta is the No. 1 airline in New York, and one of the big reasons why that’s true was on display today. We gave kids a place to play, to have fun, to relieve stress, to learn,” Henry Kuykendall, Vice President – New York, said following the build.

KaBOOM! and Delta hosted a “design day” earlier in the summer in which DreamYard kids were encouraged to draw their dream playgrounds; some of the final playground elements were based on their suggestions.

“I would have never thought regular people like kids could have come up with it, but they did,” said 9-year-old Alizah, who was interviewed by the New York Daily News for a story about the event. 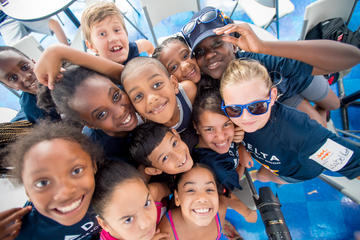 New York State Assembly Member Michael Blake, who represents the Bronx district where DreamYard is located, attended the afternoon’s ribbon-cutting ceremony and talked about the value of giving the community a safe and clean play space. He thanked the sponsors for their efforts. When Delta presented DreamYard a surprise check for $10,000 to help with maintenance and other ongoing school expenses, Assemblyman Blake matched it.

KaBOOM! is the national non-profit dedicated to giving all kids – particularly those growing up in poverty in America – the childhood they deserve filled with balanced and active play, so they can thrive. Since 1996, KaBOOM! has collaborated with partners to build, open or improve nearly 16,300 playgrounds, engaged more than one million volunteers and served 8.1 million kids.