Ahead of a winter storm expected to bring up to 4 inches of snowfall to the Atlanta Airport, Delta has pre-emptively cancelled about 350 mainline and Delta Connection flights scheduled between Friday evening and Saturday in an effort to minimize the storm’s effect on operations at the world’s busiest hub. Such pre-emptive cancellations help accommodate for additional time needed for de-icing and for takeoff rates that slow in a winter storm. 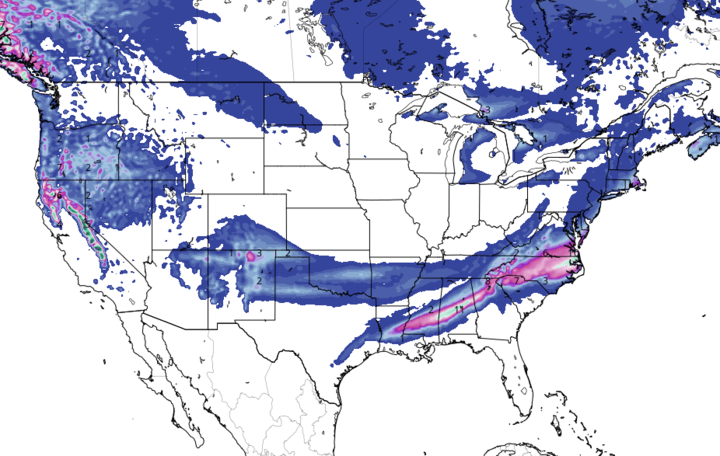 Additional cancellations are possible as Delta’ meteorologists work to pinpoint the exact timing and precipitation type as the storm approaches.

Models indicated a slight shift in the forecast with sleet arriving in the afternoon, then transitioning to a sleet and snow mix in the evening, shifting to all snow around midnight.

What’s prompting this forecast change? A weather phenomenon called a temperature inversion where, in this case, a roughly 3,000-foot layer of above-freezing airspace is sandwiched between two layers of below-freezing atmosphere will cause snow from higher altitudes to melt in the warmer layer, then refreeze as sleet before it reaches the ground. That warmer layer, meteorologists say, is hovering between 4,000 feet and 7,000 feet and prompted by a strong and relatively warm southwest wind in that layer.

The inclement weather is expected to roll out of Atlanta and push toward the Carolinas around 8 a.m. ET Saturday.

Regardless of the type of frozen precipitation, Delta’s de-ice teams will be out in full force with hundreds of trained deicers at the ready to keep Delta’s planes flying safely.

Delta on Thursday afternoon issued a winter weather waiver and travel advisory allowing customers the ability to adjust their travel plans around the storm. As always, customers are encouraged to check Delta.com or the Fly Delta Mobile App for up-to-the-minute flight status.