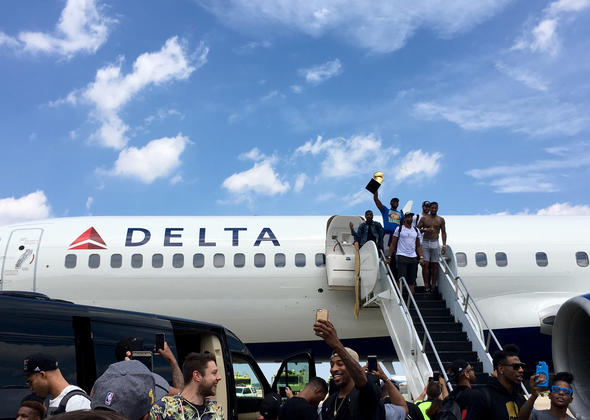 The win proved to be one of the most defining championships in sports, as the Cavaliers made NBA history by overcoming a 3-1 Finals deficit to defeat the defending champion Golden State Warriors. The win was the city's first sports title in more than 50 years.

"What an exciting end to the NBA season, and how fitting that our Delta employees got to carry the champion Cavaliers on the final leg of their journey home," said Bill Wernecke, Managing Director – Charter Operations. "Our entire operating team deser​​ves congratulations for safely and successfully executing every day over the entire season."

The Cavaliers flew home on one of Delta's newly retrofitted 757-200s, which was first introduced in January and is one of 11 new 757-200 aircraft reconfigured to replace the current charter fleet of A319s. The redesigned interiors feature 72 business class seats with bin-less overhead spacing, an oversized lavatory, sleeper seats, high-speed WiFi and club seating.