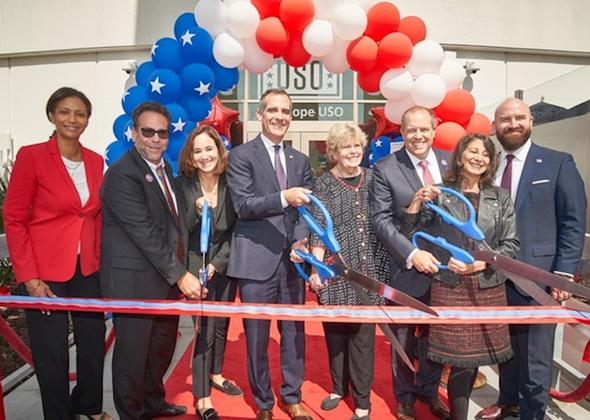 At the ceremony set under the iconic LAX Theme Building, where the new facility is located, Delta was recognized for its strong partnership with the Bob Hope USO and its capital campaign contribution of $500,000 toward the Delta Air Lines Welcome Center at the new facility. The ceremony was attended by LA Mayor Eric Garcetti, Los Angeles World Airports CEO Deborah Flint, Bob Hope USO President Bob Kurkjian, Bob Hope USO Board Member Alysia Vanitzian, Brig. Gen. Phil Garrant, and Bob Hope's daughter Linda Hope, as well as many other guests.

"Delta's support of this project, and ongoing support of Bob Hope USO programs to serve our troops and their families, shouldn't be surprising to anyone who knows the airline," said Kurkjian. "They are a best-in-class operation and we just opened a best-in-class USO center. It's a perfect match, and we could not be more proud to be associated with the amazing people of Delta Air Lines."

The new LAX Center nearly doubles the size and capacity of the facility, allowing the USO to serve more troops and their families. The previous facility, which was built in 2000, was designed to accommodate 12,000 military members and their families per year within a 4,000 sq. ft. footprint in temporary trailers and served 96,000 troops and family members in 2016. The new facility will increase the space to 7,000 sq. ft.

Delta is a longtime partner of Bob Hope USO in the Los Angeles area, sharing in its mission to lift the spirits of America's troops and their families. In addition to the $500,000 capital campaign contribution, Delta employees have been volunteering monthly at the center serving a BBQ dinner to the service men and women since 2014.

Giving back is core to Delta and its culture, and Delta is committed to being a strong partner and giving back to the communities where its employees live, work and serve, contributing one percent of its net income to nonprofit partners each year. Delta's support of armed service members and veterans is one of the airline's key pillars of community support. In addition to the Bob Hope USO, Delta supports 13 other USO chapters as well as the Congressional Medal of Honor Foundation; Folds of Honor; Luke's Wings, Fisher House, Marine Toys for Tots, the Freedom Center in Detroit, and the Armed Forces Service Center in Minneapolis-St. Paul.