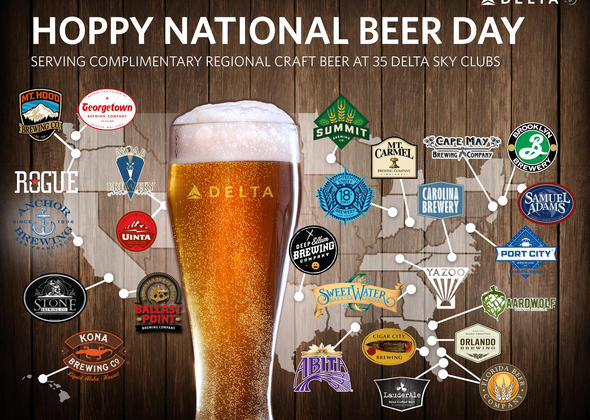 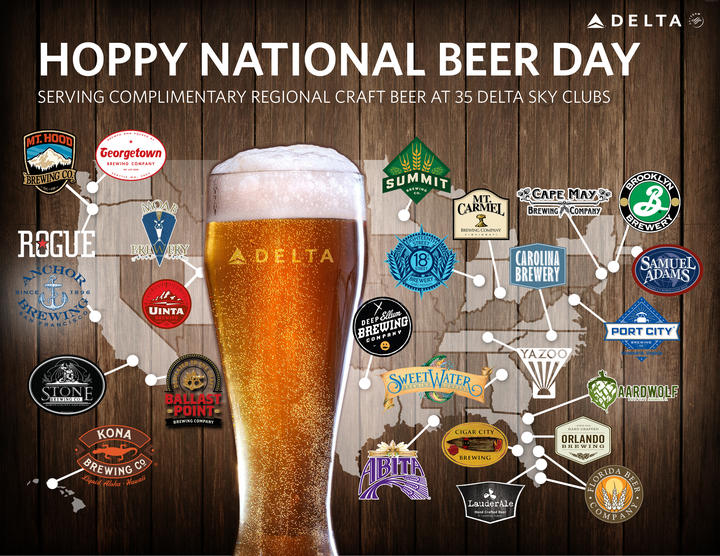 In the air or on the ground, your destination is just a ‘hop’ away.  And National Beer Day offers Delta a way to recognize the more than 30 local and regional beers served to customers on board and in Delta Sky Clubs nationwide every day.

In 2014, Delta became one of the first carriers to work with craft breweries across the country to serve a selection of beers from locally-known brands as part of its overall investment in the customer experience.

“Delta is passionate about supporting local breweries from coast-to-coast, and giving our customers a selection of regional craft beers to bring local options to our customers at 35,000 feet,” said Robyn Klein, Managing Director – On-Board Services. “We are focused on bringing regional food, wine and beer to the in-flight experience.”

The selection of regional craft beers are available on Delta's West Coast Shuttle between Los Angeles and San Francisco; between New York-LaGuardia and Boston, Washington-Regan National and Chicago-O'Hare; on Delta's transcontinental routes between New York-JFK and Los Angeles, San Francisco and Seattle; and on flights between Atlanta and New York-LaGuardia, Washington-Reagan National and Dulles, Orlando, Ft. Lauderdale, Miami, Tampa and New Orleans. Samuel Adams is available on all other domestic routes in the U.S.

As part of its overall investment in the Delta Sky Club experience, the airline recently began serving 26 complimentary, local craft beers in 35 Clubs nationwide. The diverse offerings across markets give customers another reason to fly Delta.