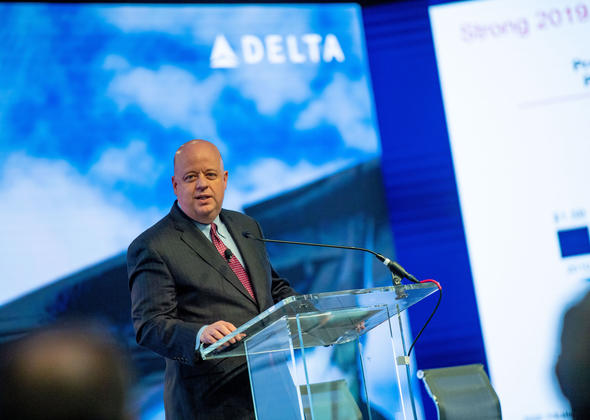 Download
Jacobson, who was named the airline industry’s best CFO eight times, will remain at Delta while a successor is named and throughout the transition.
DELTA NEWS ON THE GO. Subscribe and follow.

Paul Jacobson, Delta’s Chief Financial Officer, is retiring after a remarkable career at Delta that spanned more than two decades.

Jacobson will remain at Delta while a successor is named and throughout the transition. He joined the company in 1997 and was named CFO in 2012.

“Paul played a crucial role in Delta’s bankruptcy process and the strategy that led Delta to regain our investment-grade balance sheet while also investing billions in our people, product and service,” Delta CEO Ed Bastian wrote in a memo to employees Friday. “Paul has a gift for sharing financial messages that are clear, actionable and easily comprehended, ensuring that Delta people understand our financial standing, goals and path forward.”

Jacobson was named the airline industry’s best CFO eight times by Institutional Investor magazine’s poll of Wall Street analysts and investors. In his memo, Bastian also highlighted Jacobson’s service to the community, including his mission to raise awareness and funding for the American Heart Association after a member of his team experienced a heart attack at work.

Jacobson also helped establish the Delta Air Lines Aviation Education Building at his alma mater, Auburn University, providing resources for the next generation to learn to fly and pursue careers in aviation.

“When he leaves Delta later this year, his legacy will be our strong financial foundation and a best-in-class Finance team,” Bastian wrote.