The team is in L.A. to play in the International Champions Cup. The first match takes place tonight at the Rose Bowl.

The special day, part of the “Dream Up L.A.” campaign, kicked off at the UCLA practice facility where 10-year-old Alex, 16-year-old Jacob and 17-year-old Christopher met with players Asmir Begovic, Nemanja Matic, Victor Moses, Bertrand Traore and Pedro, and watched them practice. 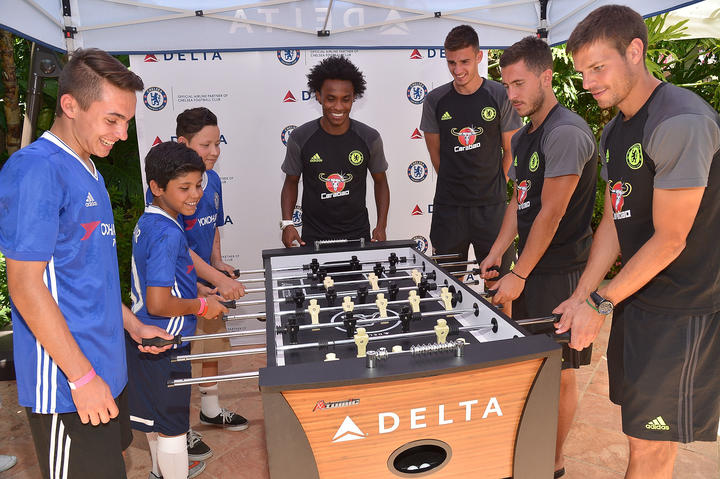 The kids then joined the players out on the field, where they took their roles as honorary players very seriously, working up a sweat doing drills with fitness coach Chris Jones. Later in the day, they competed against Chelsea players Eden Hazard, Matt Miazga, Cesar Azpilicueta and Willian in a fun game of foosball at the Beverly Hills Hotel.

“Chelsea is an important partner for Delta winning in London,” said Steve Long, Managing Director - EMEA Market and Sales Development & Analysis. “Part of our partnership focuses on giving back to the communities we serve. We have already done this in the U.K. and New York and being able to continue this in Los Angeles has ensured the patients had a day they will never forget.”

Before the day was over, Delta and Chelsea had two more surprises in store for the young fans. The three of them and their families were invited to the Rose Bowl to watch Wednesday’s match between Chelsea and Liverpool, in addition to tickets to attend a Chelsea home game at Stamford Bridge.

“When we first got here I saw people with Chelsea jerseys and equipment. I’m a big fan, and when I realized it all, I was in shock,” said 16-year-old Jacob. “Seeing training was awesome - a lot of fun - and Pedro showed me a few things. Now I’m so excited for the game, and to be going to London is awesome.”

Phil Lindsey, Managing Director – Airport Customer Service, Los Angeles, who presented the group with their Delta tickets, added, “As a parent, there is nothing more satisfying than seeing the look of surprise and excitement when a child has a dream come true. It was truly an honor to be part of the experience that helped Alex, Jacob and Christopher fulfill one of theirs.”

Delta and Chelsea Football Club first joined forces in 2012, and since then, have worked together to bring the airline’s 180 million annual passengers closer to the club.