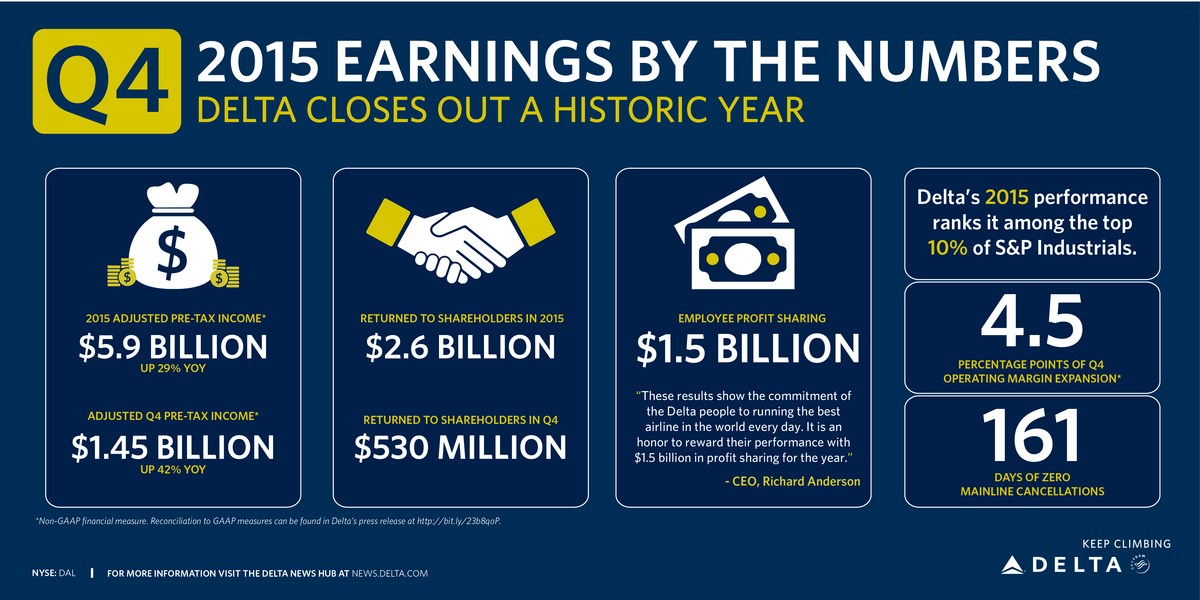 Delta’s stock was trading at $46.60 per share, up nearly 5 percent, mid-morning. The airline’s market capitalization, which reflects the total value of a company’s stock, was at more than $35 billion, significantly more than any other airline.

“We see demand as very strong,” said Glen Hauenstein, Delta’s chief revenue officer, during a conference call Tuesday with Wall Street analysts and media. He said that some of the savings Americans are getting from lower fuel prices are being spent on air travel, boosting Delta’s bookings through the spring of 2016.

Delta posted a record-breaking fourth quarter Tuesday, with adjusted pre-tax income of $1.45 billion, up 42 percent from the previous year. Adjusted net income was $1.18 per diluted share. On a GAAP basis, pre-tax income was $1.53 billion and EPS was $1.25 for the quarter.

The quarter capped a historic year for the global airline, which reported full-year 2015 adjusted pre-tax income of $5.9 billion1, up 29 percent from 2014. Delta also announced it will pay $1.5 billion in profit sharing for the year to its 80,000 global employees next month – the largest profit-sharing payout in airline history. On a GAAP basis, pre-tax income was $7.2 billion for the year.

“Our 2015 performance ranks Delta among the top 10 percent of S&P industrials,” said Delta CEO Richard Anderson. “I want to thank the entire Delta team for all their hard work that contributed to another record year in 2015.”

Delta customers enjoyed the benefits of the airline’s industry-leading operational excellence during the year, with a total of 161 days with zero mainline cancellations, and an on-time rate of 85.9 percent. And investors were rewarded with $2.6 billion in dividends and share repurchases in 2015, including $530 million during the December quarter, according to the report.

The financial results were driven in part by lower prices for jet fuel throughout 2015. During the fourth quarter, adjusted fuel expenses2 dropped by $726 million compared to the same period in 2014, and market fuel prices were down 30 percent.

In 2016, the airline is expected to save $3 billion in jet fuel thanks to lower prices, Anderson said during the conference call.

“Rigorous cost discipline is a key part of the Delta culture, which was proven by our ability to keep non-fuel unit costs flat in 2015 while significantly investing in our people, products and services,” said Paul Jacobson, Delta’s chief financial officer, in a press release.

The airline reported that passenger unit revenues were down 1.6 percent for the quarter, including 2 percentage points of impact from foreign currency fluctuations.

After seeing declines in 2015, Delta is committed to strengthening its unit revenues next year, Anderson said. “It is important for us to produce unit revenue improvements and we are committed to doing so,” he said.

Bastian pointed to new products such as Delta Comfort+, which increased nearly 60 percent during the fourth quarter, as well as a 20 percent increase in First Class upselling, as revenue opportunities. And he added that Delta is expanding service in important business markets like New York, Seattle and Los Angeles.

Delta produces a revenue premium compared to its competitors of about 108 percent, which means that customers pay $1.08 on Delta for every dollar they spend on another airline. Domestically that premium rises to 114 percent.

In response to a question from a reporter, Anderson said that Delta recently met with officials from Bombardier to discuss the CSeries jet, which the manufacturer is positioning as its new flagship.

“It’s quite an impressive airplane,” Anderson, and said that “we’re taking a very serious look at it.”

He praised the geared turbofan engine that powers the narrowbody CSeries jets. “It’s the first big innovation since the Boeing 787 revolutionized the composite structure for the fuselage of the airplane,” he said. “At the right price it’s quite a competitive airplane, particularly given the engine technology.”

Other highlights from Delta’s earnings report and conference call:

Delta, which has been consistently profitable on an annual basis since 2010, is the first major airline to report earnings for the fourth quarter of 2015. In coming weeks, American Airlines, United Airlines, Southwest Airlines, JetBlue Airways and Alaska Airlines will all report their results.  The industry overall is expected to post strong results for the quarter.

“Our 2015 performance was a record for Delta on all fronts – with industry-leading operational performance, superior customer satisfaction, and a $5.9 billion adjusted pre-tax profit.” – CEO Richard Anderson

1The following tables show reconciliations of non-GAAP financial measures. The reasons Delta uses these measures are described below.

Delta sometimes uses information ("non-GAAP financial measures") that is derived from the Consolidated Financial Statements, but

that is not presented in accordance with accounting principles generally accepted in the U.S. (“GAAP”). Under the U.S. Securities

and Exchange Commission rules, non-GAAP financial measures may be considered in addition to results prepared in accordance

with GAAP, but should not be considered a substitute for or superior to GAAP results. The tables below show reconciliations of non-

Forward Looking Projections. Delta is unable to reconcile certain forward-looking projections to GAAP as the nature or amount of

special items cannot be estimated at this time.

Pre-Tax Income and Net Income, adjusted for special items. We adjust for the following items to determine pre-tax income and

net income, adjusted for special items, for the reasons described below:

periods other than the settlement period. Such fair value changes are not necessarily indicative of the actual settlement

value of the underlying hedge in the contract settlement period. Settlements represent cash received or paid on hedge

contracts settled during the period. These items adjust fuel expense to show the economic impact of hedging, including

cash received or paid on hedge contracts during the period. Adjusting for these items allows investors to better

understand and analyze our core operational performance in the periods shown.

investors to analyze the company’s recurring core performance in the period shown.

Virgin Atlantic MTM adjustments. We record our proportionate share of earnings from our equity investment in Virgin

Atlantic in other expense. We adjust for Virgin Atlantic's MTM adjustments to allow investors to better understand and

analyze the company’s core financial performance in the period shown.

Income tax. Pre-tax income is adjusted for the income tax effect of special items. We believe this adjustment allows

investors to better understand and analyze the company’s core financial performance in the periods shown. 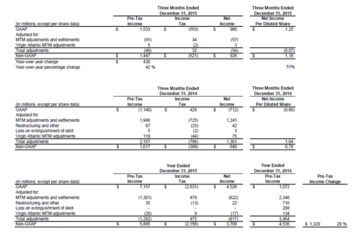 2Fuel expense, adjusted and Average fuel price per gallon, adjusted. The tables below show the components of fuel expense,

including the impact of the refinery segment and hedging on fuel expense and average price per gallon. We then adjust for MTM

adjustments and settlements for the reason described below:

the settlement period. Such fair value changes are not necessarily indicative of the actual settlement value of the

settled during the period. These items adjust fuel expense to show the economic impact of hedging, including cash

received or paid on hedge contracts during the period. Adjusting for these items allows investors to better understand and

analyze our core operational performance in the periods shown. 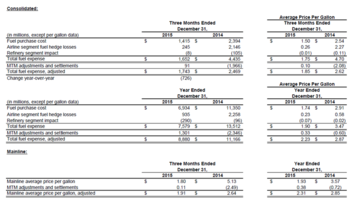