Skip to main content
Article
Veterans and the Military 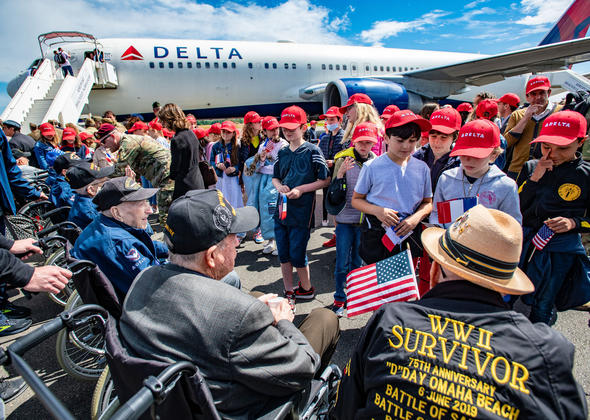 Download
The trip, the first for a U.S. airline to Normandy's Deauville Airport, was months in the making.
DELTA NEWS ON THE GO. Subscribe and follow.

What does it mean to say no one better connects the world? It means fostering the Delta Difference on a global scale across generations, cultures, faiths, nationalities and beliefs.

It means pulling out all the stops – in conjunction with the Best Defense Foundation and Michelin – to bring veterans of the “Greatest Generation” who stormed the beaches of Nazi-occupied France back to those fateful sands. Altogether, 29 of these heroes – now all in their 90s and 100s – joined 28 Delta and eight Michelin veterans of the armed forces for this year’s D-Day commemorations in France. 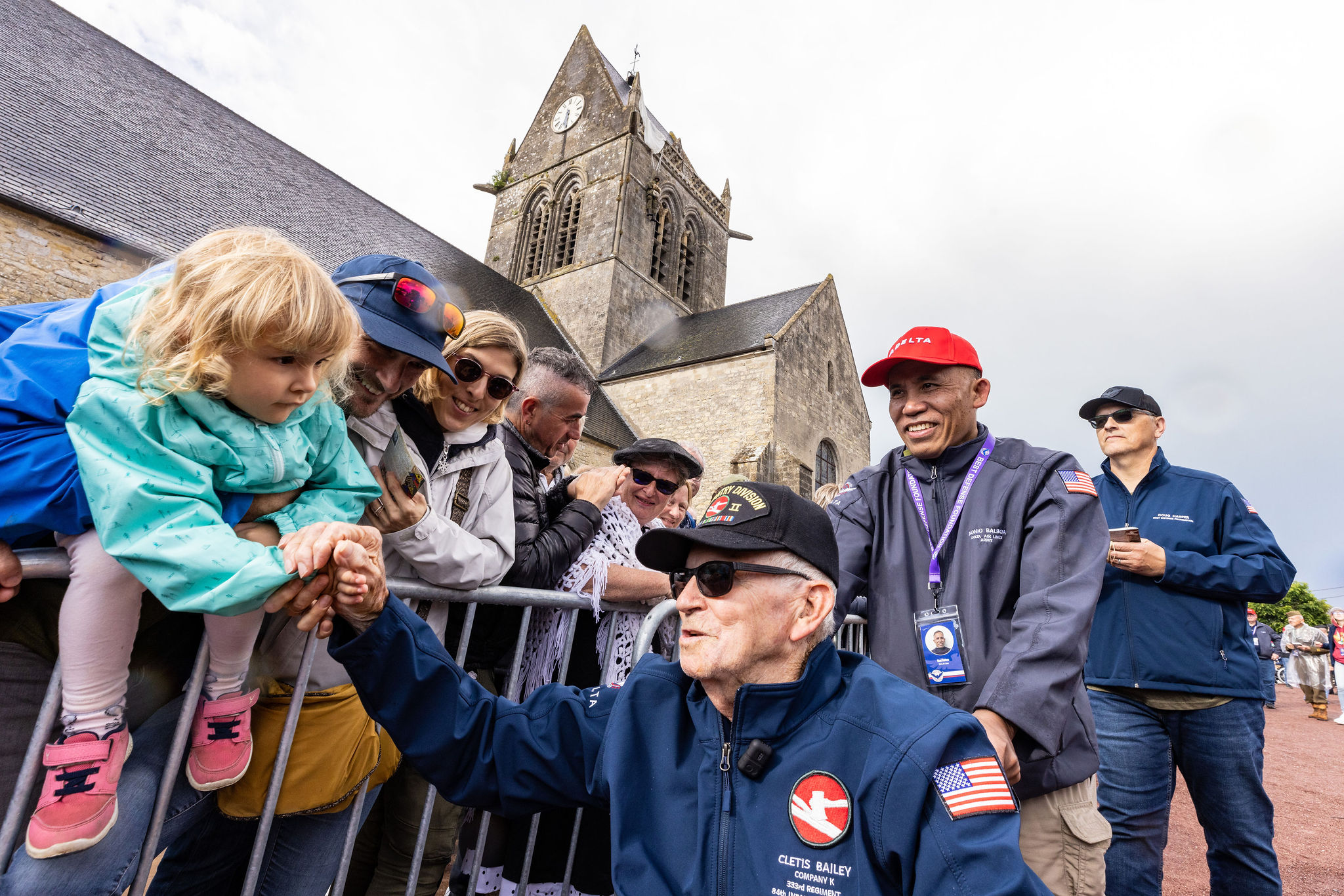 The trip, the first for a U.S. airline to Normandy's Deauville Airport, was months in the making. Teams from across the airline worked tirelessly to develop a flawless plan, down to which aircraft type would be most suitable for the trans-Atlantic journey to DOL and arranging a flight crew also comprised of military veterans.

Upon arrival, the veterans were greeted by U.S. Ambassador to France and Monaco Denise Campbell Bauer, alongside many local French dignitaries who supported the operation. 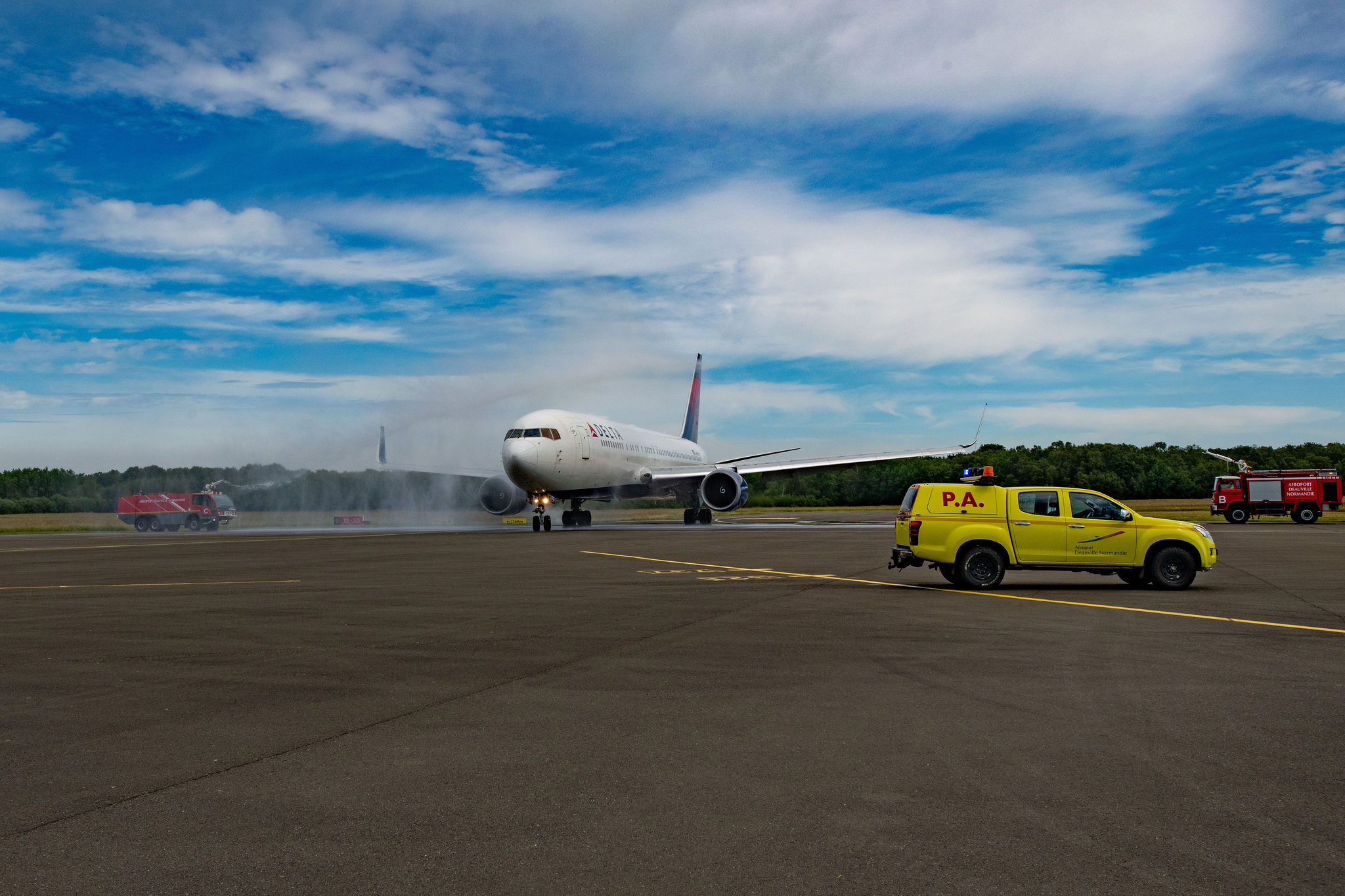 Delta makes its historic landing in Normandy and is welcomed with a water cannon salute.

The focus of the mission? Creating a memorable experience for the World War II heroes, who not only spent time reminiscing and remembering the events that began the liberation of France, but sharing their stories with younger generations about the sacrifices made by so many. 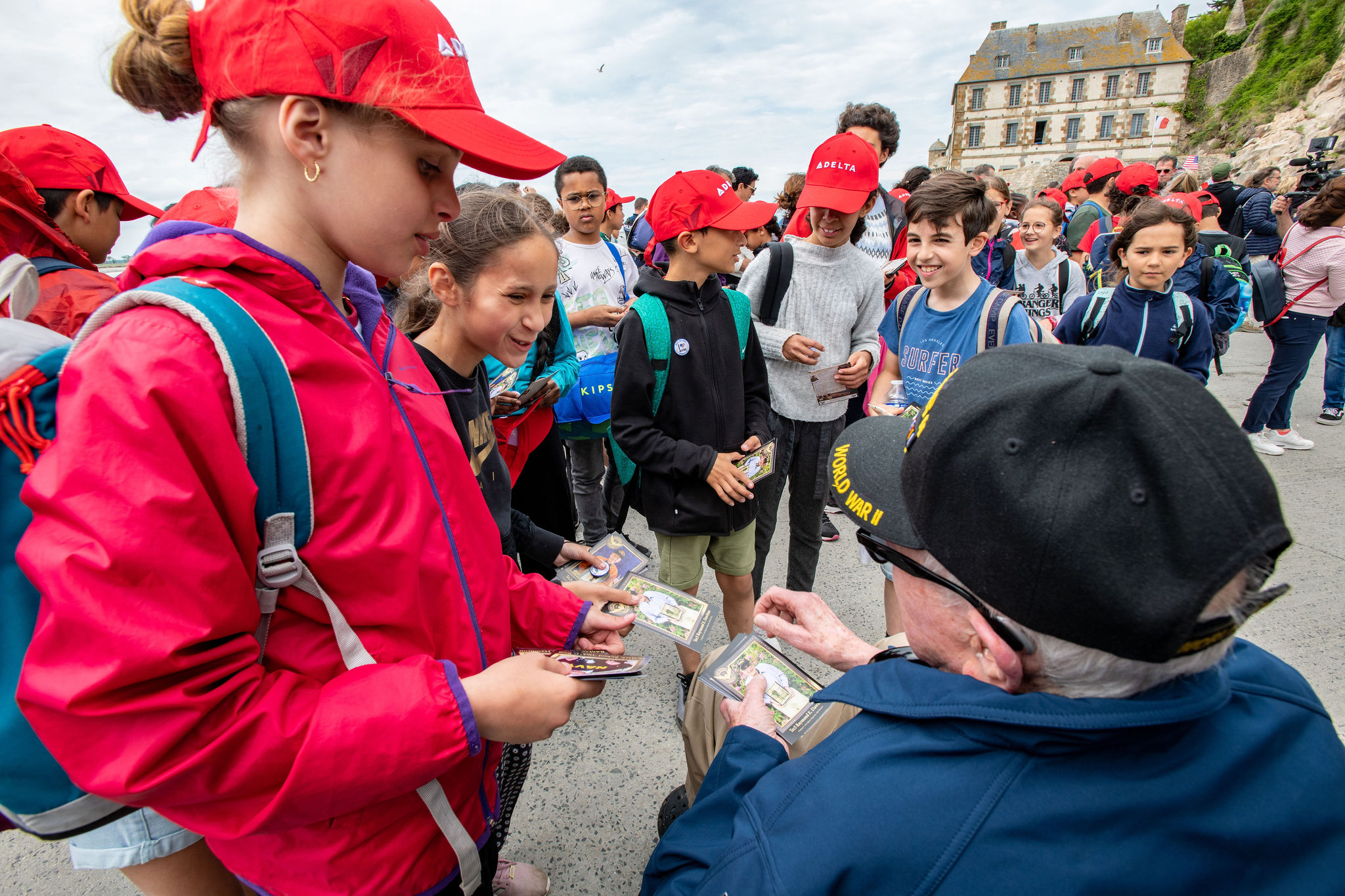 Raymond Dawkins passes his cards out to children at Mont St. Michel. 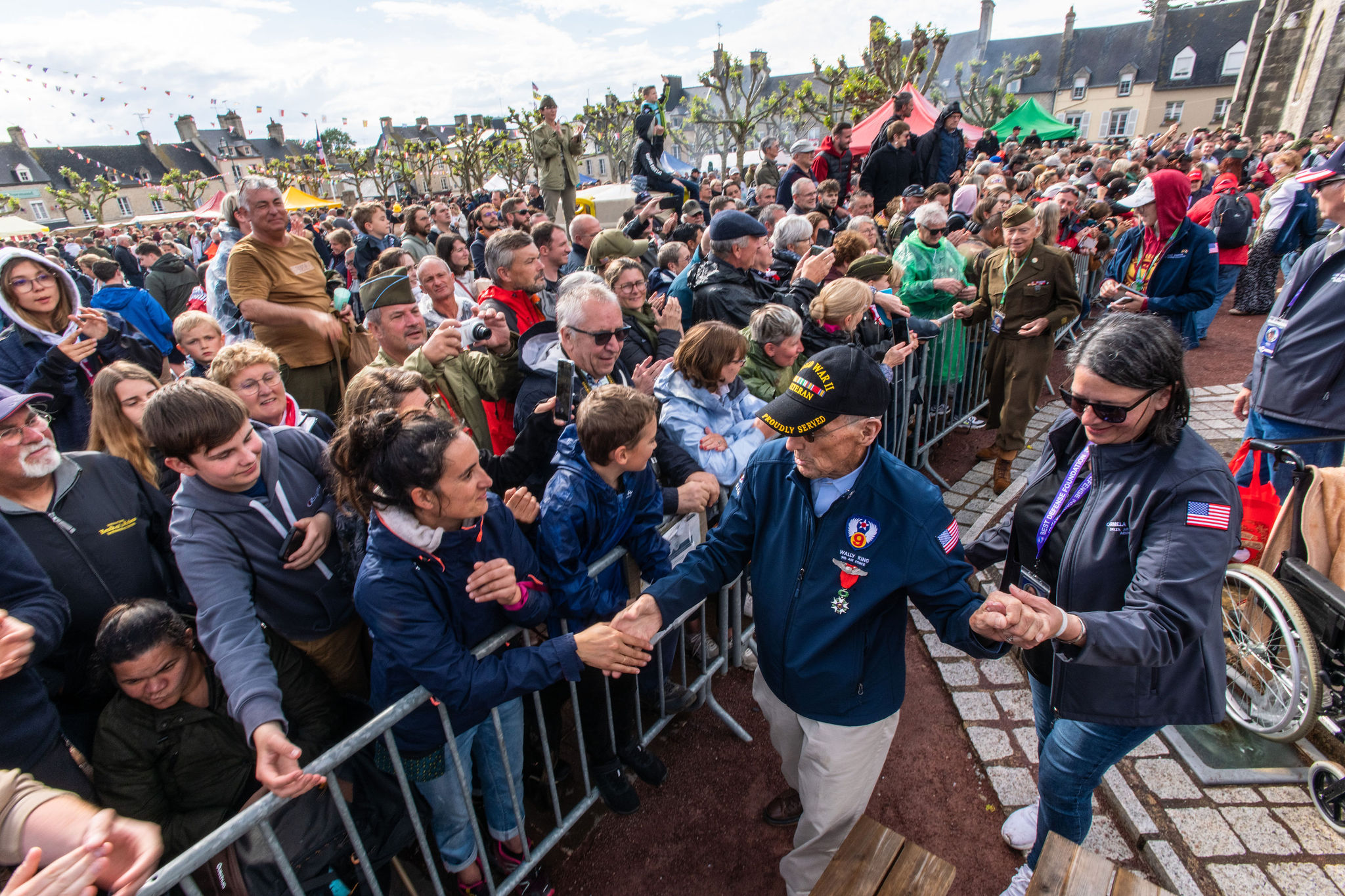 Thousands of French citizens of all ages greeted the group everywhere they traveled, paying respect to those who liberated their ancestors during World War II. Children donned red Delta hats as a symbol of the airline’s global community. 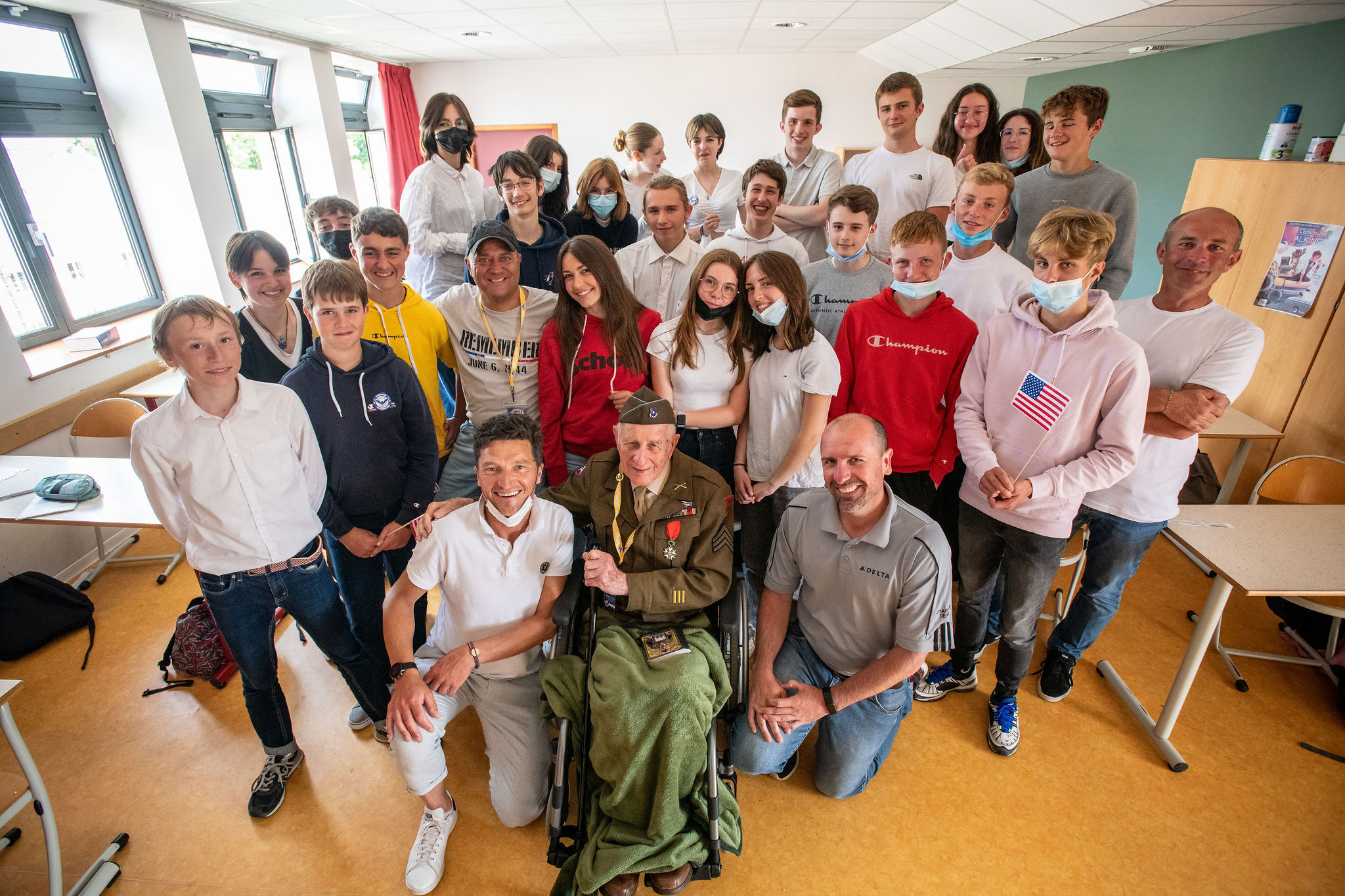 Delta’s Nick Scott with Bud Sabetay in the classroom during the Bayeux school visit.

In Bayeux, the veterans connected with students not much younger than they were when they first put on a military uniform. Each classroom hosted a World War II veteran, and students made memories that will last a lifetime with those who made history. 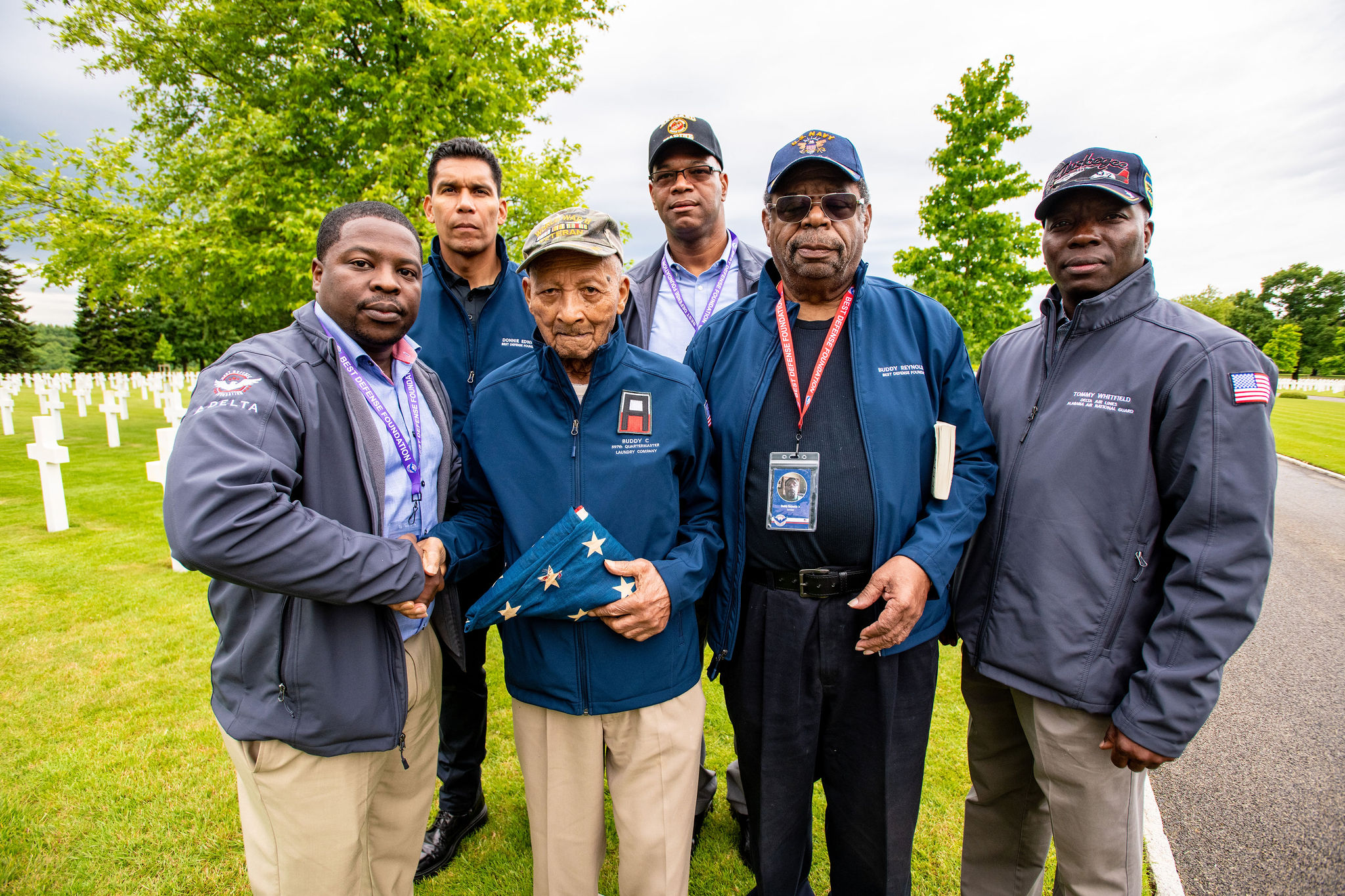 One of those history-makers was Staff Sgt. Buddy Reynolds, a barrier-breaker a segregated era. Reynolds, who is Black, served as a wheeled vehicle mechanic and worked on the all-Black supply line of the Red Ball Express to deliver food, ammunition and supplies to the front lines. Before the trip, Buddy didn’t even have an official birth certificate. The U.S. passport he secured with the Best Defense Foundation's help was his first. 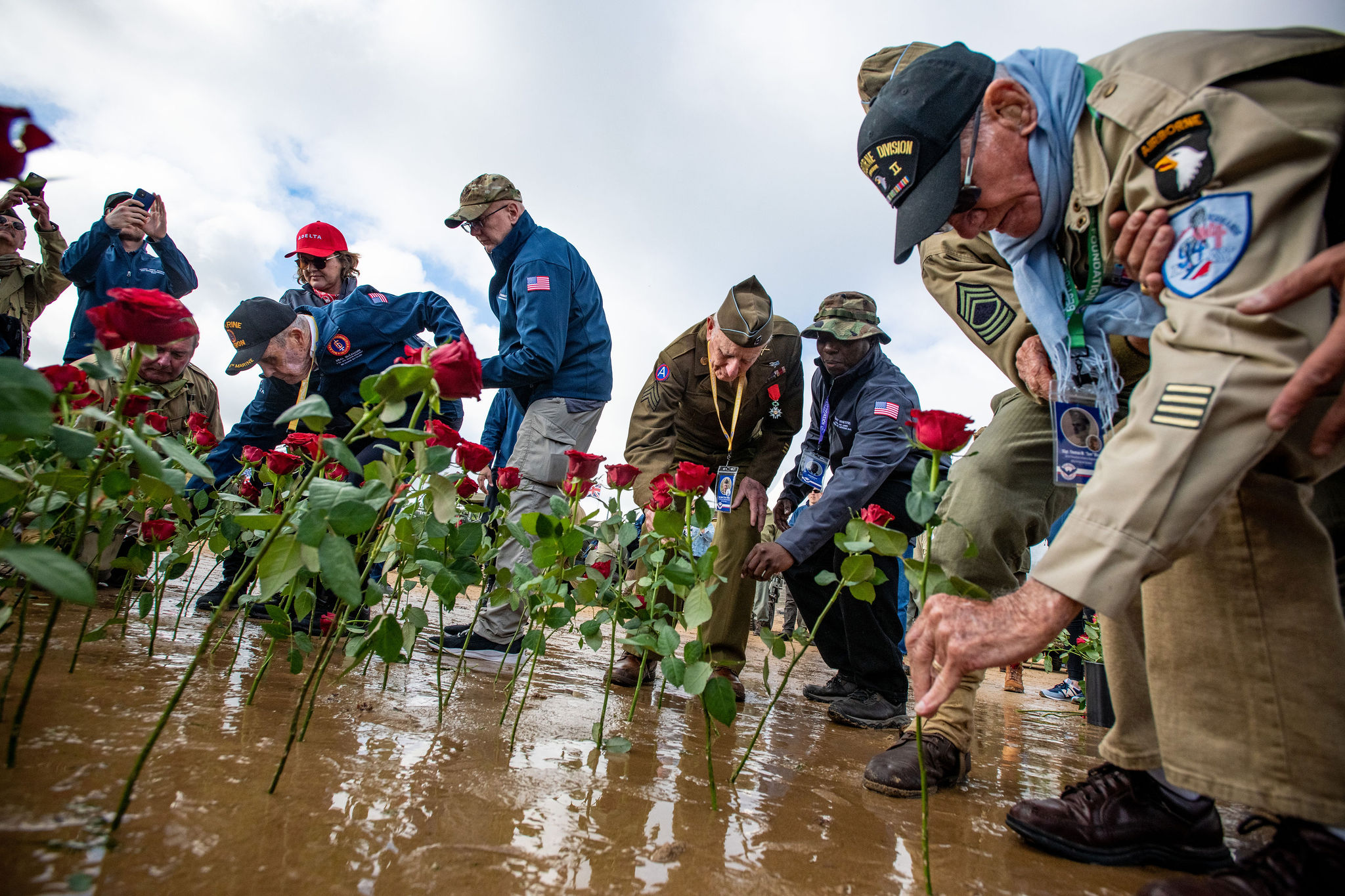 Reynolds and his fellow veterans were escorted back to the battlefield on D-Day for ceremonial events at Omaha and Utah beaches, as well as the official commemoration at the Normandy American Cemetery and Memorial. They were able to walk on the sand and pay tribute to those who gave their lives for freedom on those very beaches 78 years ago. 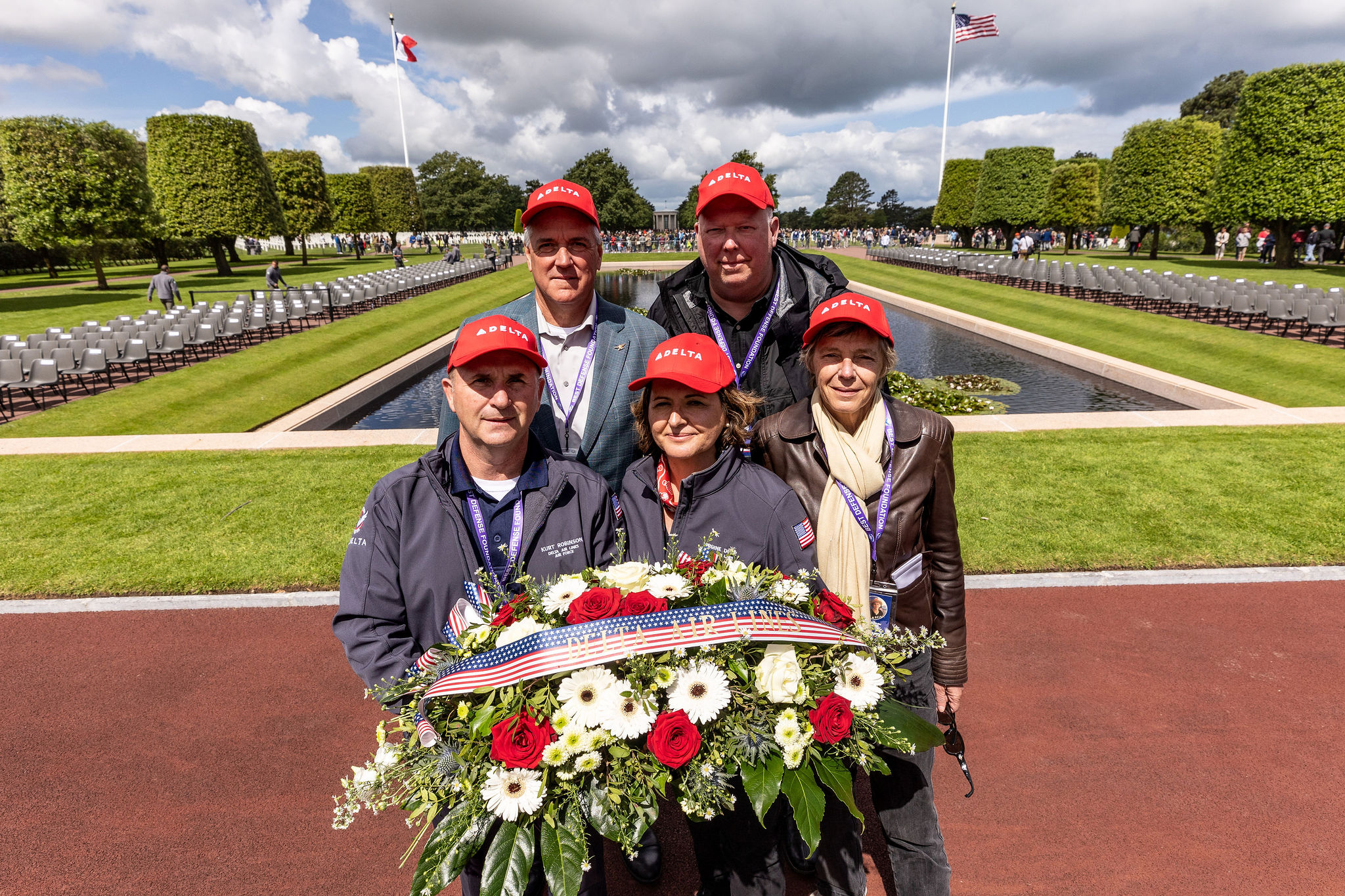 Sgt. Clair “CP” Martin landed in waist-deep water at Omaha Beach on D-Day and was wounded after a tank was hit near him. Sgt. Robert “Bud” Sabetay was part of the small delegation of Jewish-American soldiers to fight in World War II and served under Gen. George S. Patton during the Battle of the Bulge. Sabetay was also wounded by rocket fire. During the trip, French officials awarded Martin and Sabetay the French Légion d'honneur, the nation's highest military honor. 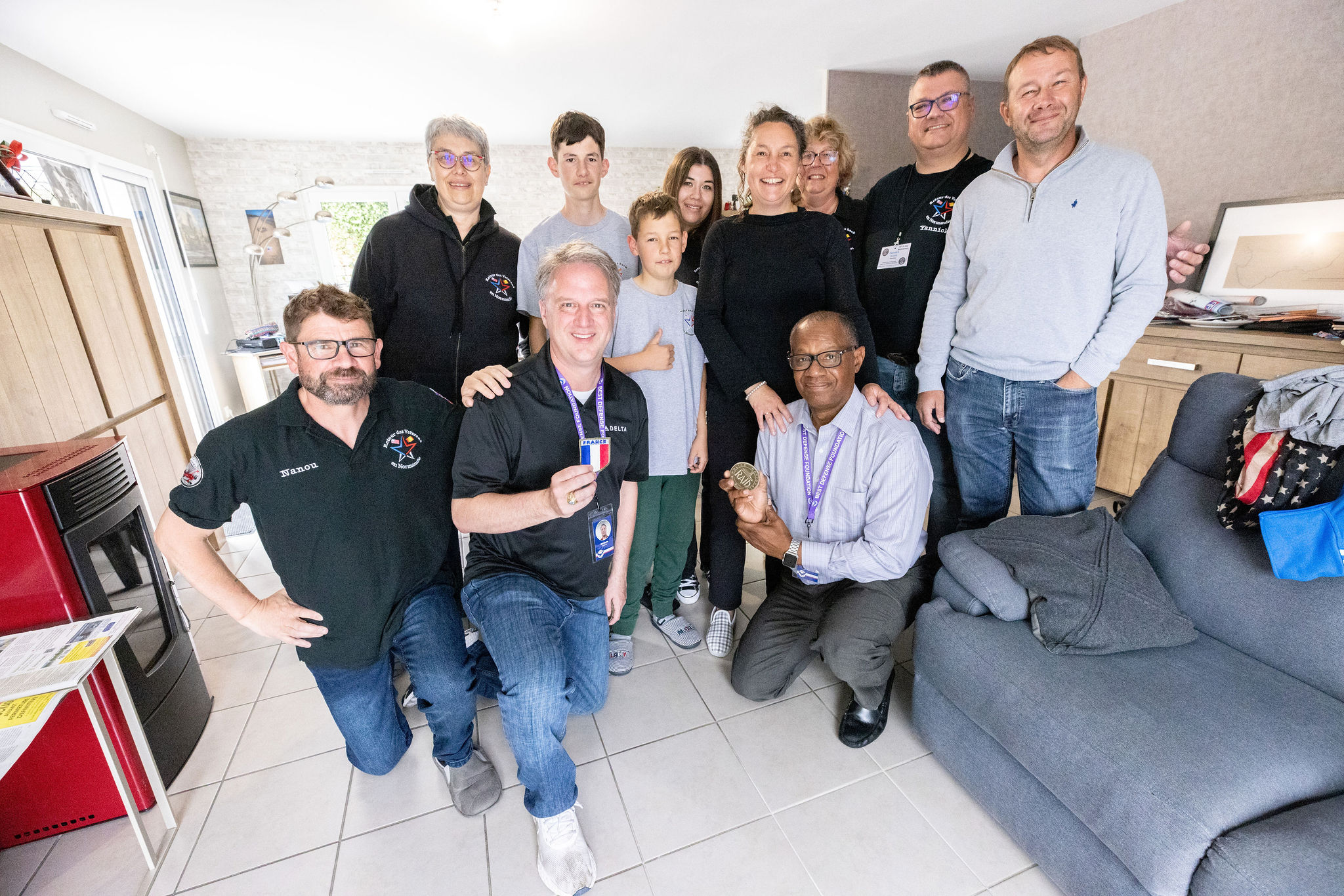 Delta’s Rubbin Sheffield and Chris Guerriero at dinner with their Normandy host family.

Delta’s military veteran employees experienced French culture and hospitality at dinners with local host families – allowing everyone to forge new relationships and deepen the mutual respect between the French and Americans. Gift exchanges allowed local families to hold onto the Delta brand forever.

Delta Air Lines’ employee base consists of more than 9,000 military veterans, and the company’s foundation was built on the shoulders of many World War II veterans. Delta, the Best Defense Foundation and Michelin share the same commitment to servant leadership and our military veteran community, and their sponsorship of this trip afforded hundreds of people the opportunity to make a rare connection. 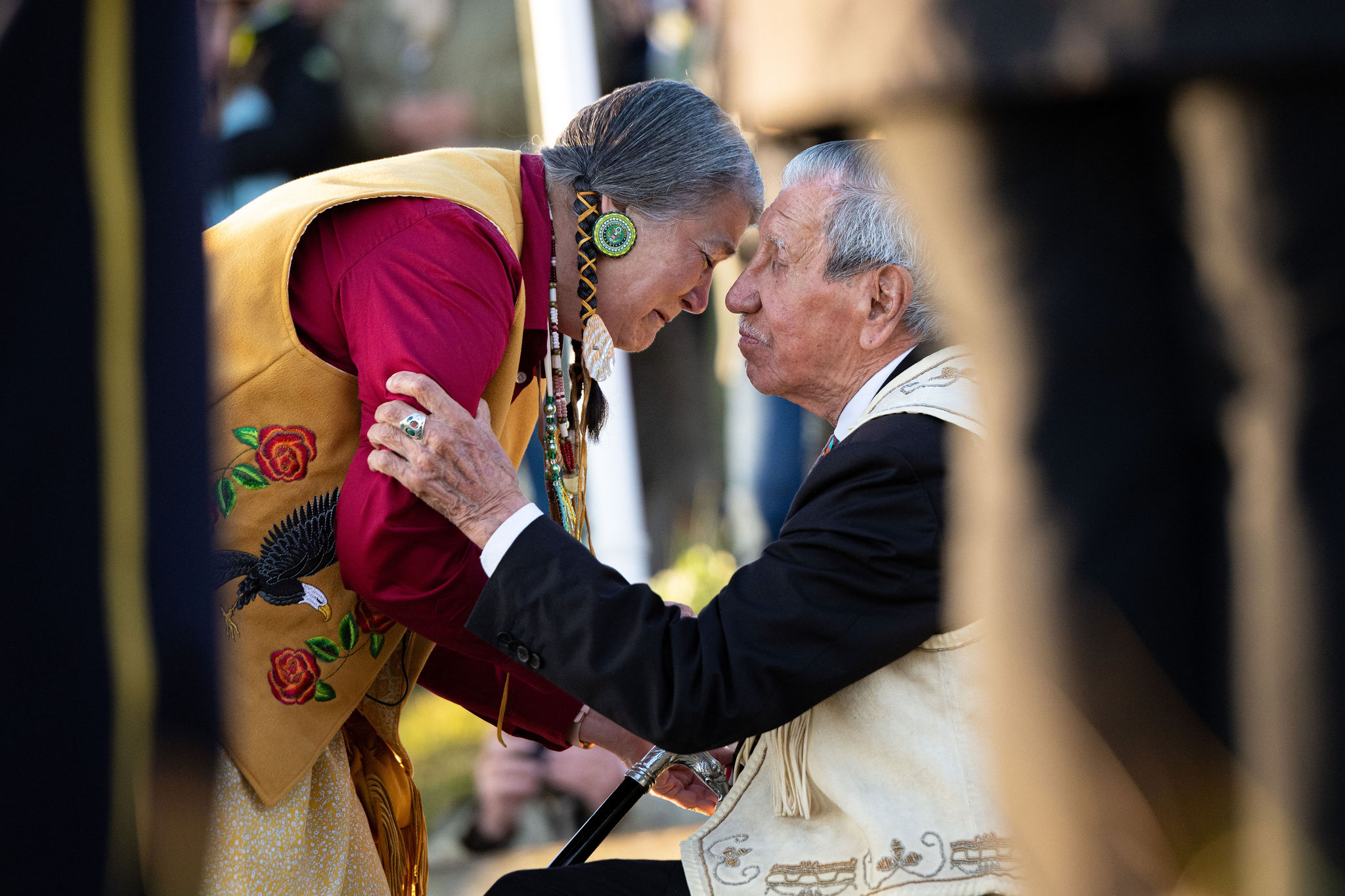 Delta’s veterans established bonds with their World War II counterparts that will last a lifetime, and the stories and legacies will be forever told across France.

“The Delta family will never forget the special moments, life advice and untethered relationships we made with this group of American heroes, and it was our distinct honor to witness history with our role models that motivated each of us to put on the uniform and serve our nation,” said Kurt Robinson - Manager, Quality Control, Line/Receiving Inspection and President of Delta's Veterans Business Resource Group. 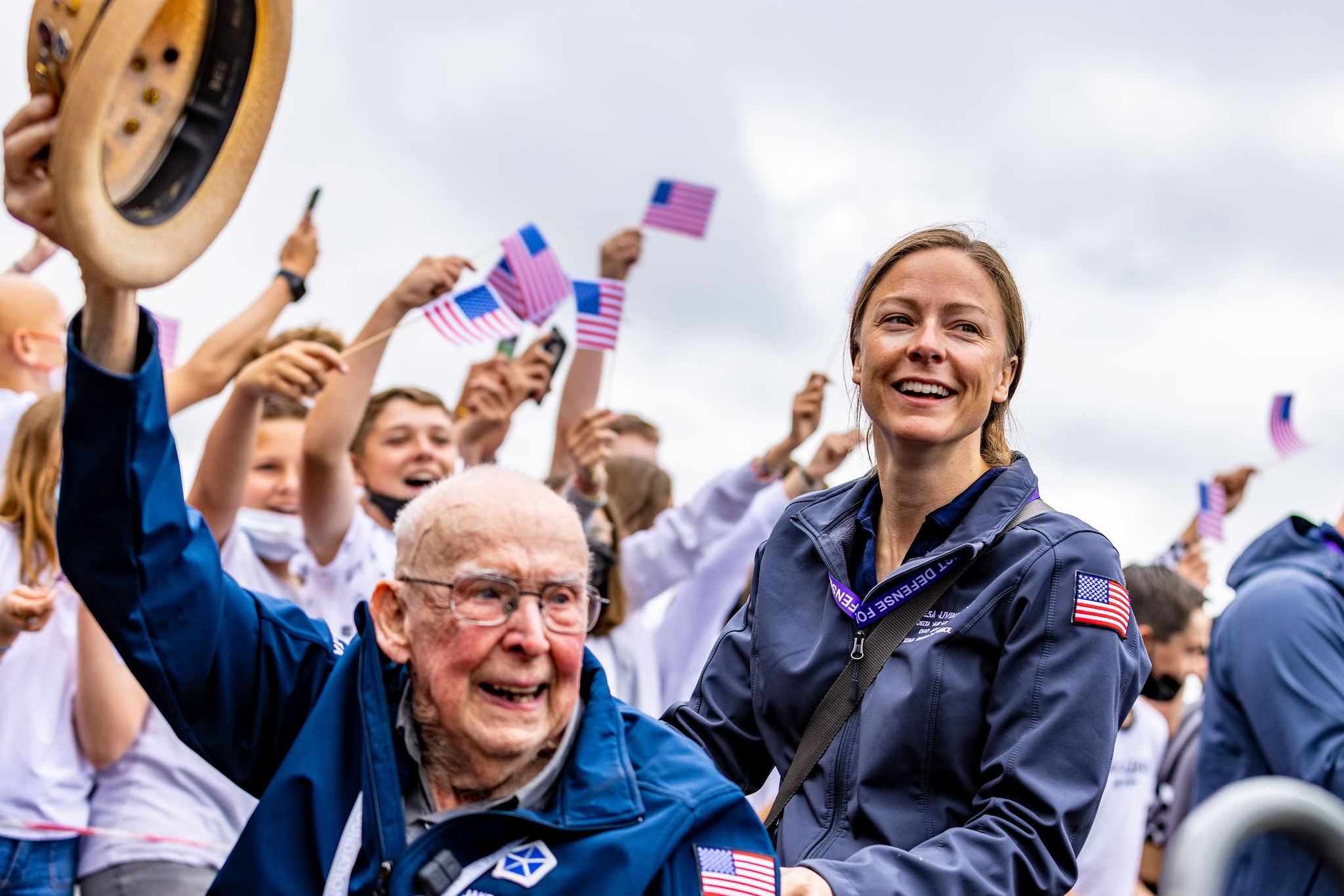 There were many stories told of the lives lost on that fateful day of D-Day – though the veterans are inclined to shift the focus to their fallen brethren, still buried in the sands of this hallowed ground.

“I feel their presence right now. Their souls are right here witnessing this,” World War II veteran Jake Larson told the “Today” show. “I’m not the hero. I’m here to tell you the heroes are buried over here.” 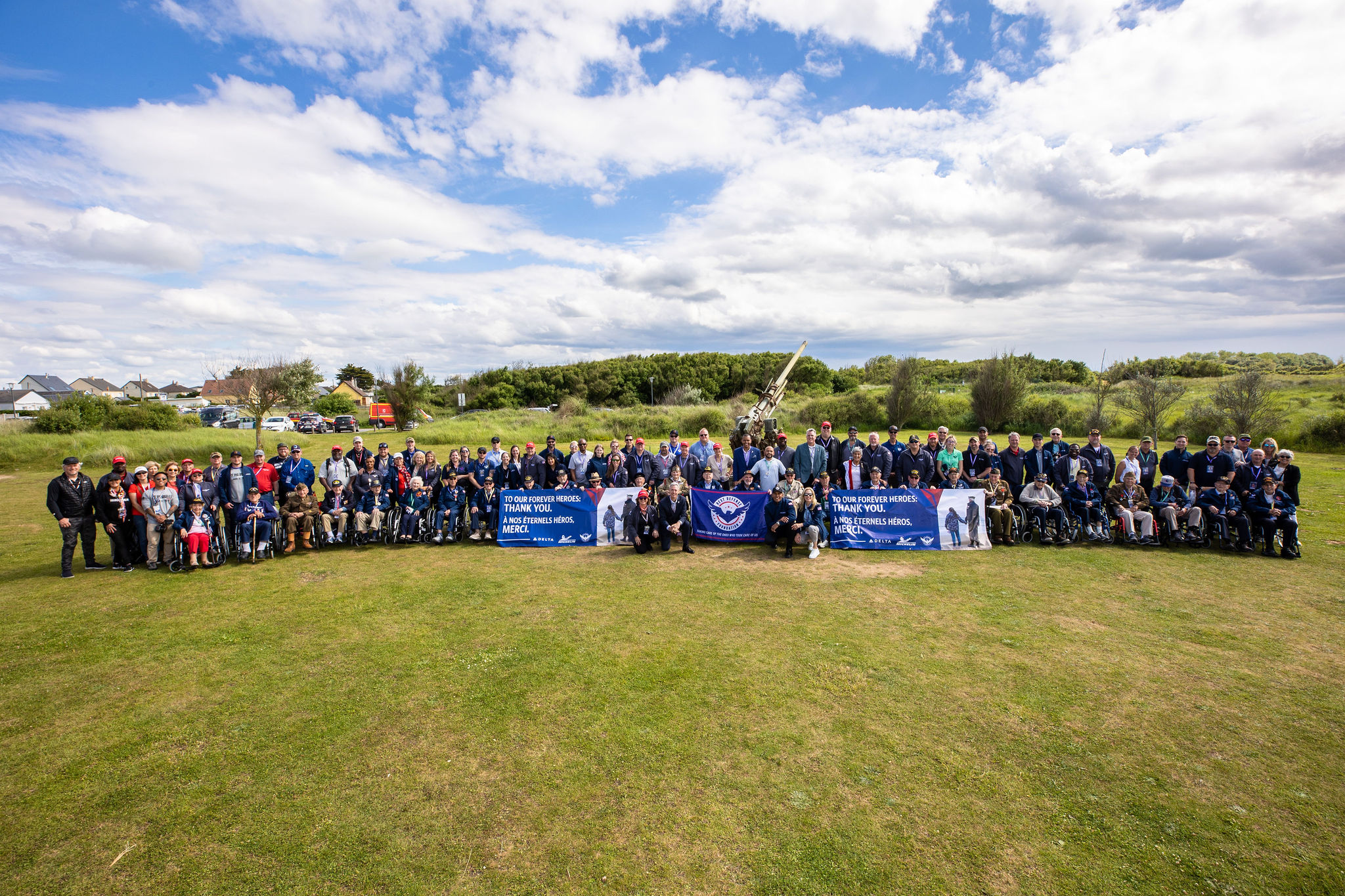 Delta, Michelin and the Best Defense Foundation with the World War II veterans at Utah Beach. 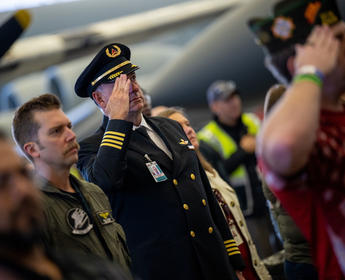 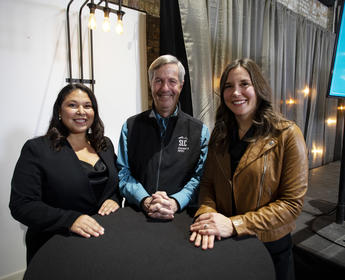 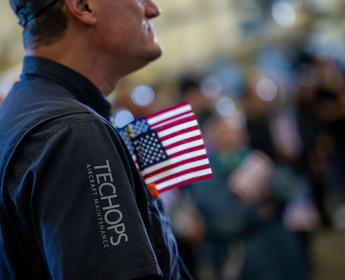