“Our focus for this industry-leading service is on the highest-volume transcontinental markets from Atlanta and New York City where Delta is a major competitor for long-haul customer loyalty,” said Delta’s Chief Operating Officer Jim Whitehurst. “Improvements to our domestic product complement our international growth and the overall transformation of our network. Going forward, this new service will also be available to customers flying from Florida to the West Coast, as well as on many of our overseas routes, as we continue making improvements to our international BusinessElite and international coach class products.”

Delta is unveiling the product first on its fleet of 48 former Song Boeing 757s on domestic, transcontinental flights primarily from both New York’s JFK and Atlanta in a two-class configuration featuring 26 first-class seats with 38 inches of pitch while coach class offers 158 seats with 33 inches of pitch – both in comfortable all-leather seating. Between September and November, the airline will introduce approximately 18 aircraft per month, each featuring this exclusive new product. By the end of November, all flights from JFK to the West Coast will fly this signature service. Through 2008, Delta will expand the product to include more than 100 Boeing 767-300, 767-400, 757 and 737-800 aircraft. In November, these aircraft will operate approximately 70 daily round-trip flights, with plans to double this frequency over time. On delta.com and in the OAG system, Delta will feature a TV icon to designate which flights will provide the signature service.

“Delta’s sophisticated new service will dramatically distinguish our coast-to-coast flights from those of our competitors,” said Joanne Smith, vice president of Marketing for Delta. “This product is the result of feedback we received from our frequent business customers who flew our former Song service and who loved the onboard entertainment but who wanted a first-class option. While initially launching with state-of-the-art entertainment and signature cocktails, Delta’s new transcontinental product will soon feature distinctive food choices for customers in the first class cabin, as well as a food-for-sale program for passengers in the main cabin and exclusive, unique entertainment programming.”

For the month of September, Delta customers can peruse a vast collection of movie selections, including:

Additionally, customers can choose from 24 channels of live TV, including:

With exclusive MP3 programming, passengers can also create customized playlists from a selection of more than 1,600 songs, representing a wide range of artists and genres that cater to every taste:

About Delta
Delta Air Lines (Other OTC: DALRQ) offers customers service to more destinations than any global airline with Delta and Delta Connection carrier service to 292 destinations in 46 countries. With more than 50 new international routes added in the last year, Delta is America’s fastest growing international airline and is the world’s leading carrier between the United States and destinations across Europe, India and Israel with flights to 29 transatlantic destinations. To Latin America and the Caribbean, Delta offers nearly 400 weekly flights to 48 destinations. Delta's marketing alliances also allow customers to earn and redeem SkyMiles on more than 14,000 flights offered by SkyTeam and other partners. Delta is a founding member of SkyTeam, a global airline alliance that provides customers with extensive worldwide destinations, flights and services. Including its SkyTeam and worldwide codeshare partners, Delta offers flights to 461 worldwide destinations in 96 countries. Customers can check in for flights, print boarding passes and check flight status at delta.com. 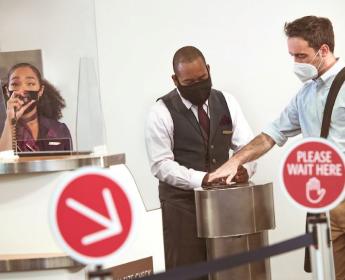