Travel Weekly readers have voted Delta Best Domestic Airline for the seventh year running, Top Airline Overall for the fourth straight year and Best Sales and Service for the second year. The awards recognize the airline's investment in world-class corporate sales initiatives as well as technology innovations and products.

For the first time, Delta won the Legacy in Travel Philanthropy Award at the Heart of Travel Awards reception, held prior to the Readers Choice Awards gala. Organized by Tourism Cares, the judges cited Delta's commitment to giving back 1 percent, and making an impact, to communities around the globe. In 2016, Delta gave $38 million to charities worldwide.

"It is truly an honor to win these awards, especially the Legacy in Travel Philanthropy award, which highlights our strong Delta culture of giving back to the communities where our employees live, work and serve, something that has been at the heart of Delta for more than 80 years," said Kristen Shovlin, Vice President - Sales Operations and Development. "Congratulations to the team and thank you for everything you do for Delta." 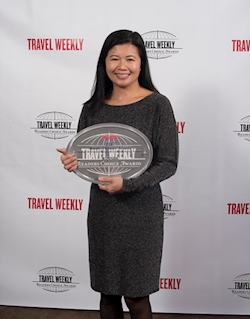 The awards represent the best of the best of the travel industry. The nominees and award recipients were chosen in two rounds of voting by Travel Weekly's audience of travel professionals.

Jennie Ho, President, Delta Vacations, said, "I'm truly proud of the entire Delta Vacations team for their relentless drive and dedication to serve our customers every day. These award wins indicate that our travel agency partners trust us to deliver the best products and service excellence, and recognize us among the best of the best."

In addition, readers of Global Traveler voted Delta the Best Airline for New Service Launch (Detroit – London-Heathrow) and Best Airline App. Previously Delta has won the award for best lounges with the Delta Sky Clubs. These coveted Global Traveler Reader Survey awards are presented annually to the industry suppliers who led the way in product and service during the past year.