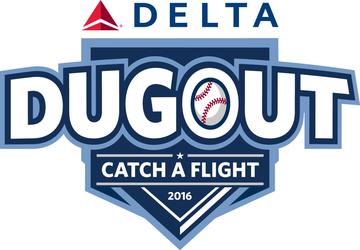 Delta is celebrating America’s pastime by rewarding fans of six of the Major League Baseball teams the airline sponsors with unique prizes, including the chance to play catch with a baseball superstar during a trip to Spring Training 2017.

“Delta Dugout reaches new heights in 2016 as we offer fans of the teams we sponsor the opportunity to catch flights, game tickets and actually play catch with a baseball superstar,” said William Betz, Delta’s General Manager – Marketing. “This year’s multi-city program allows Delta to engage and interact with devoted fans around the country who are also current and future Delta customers.”

Fans can sign up for Delta Dugout by visiting one of the six team sites and entering their existing Delta SkyMiles account information. Fans without a SkyMiles account can register directly on the platform page. A dedicated landing page has been created for each team.

Teaming up with Delta to serve as program ambassadors are players past and present: Chipper Jones, former third-baseman with the Atlanta Braves; Noah Syndergaard, pitcher for the New York Mets; and Didi Gregorius, shortstop for the New York Yankees. The players will participate in promotional initiatives including campaign videos and special events and appearances.

In September, one fan from each of the six teams will be selected to win the grand prize: a once-in-a-lifetime opportunity to play a game of catch with a baseball idol during 2017 Spring Training. Additional prizes will be awarded to more fans throughout the season, based on the total number of road wins recorded by each participating team.