Already tracking Santa? All month long, Delta "elves" from Seattle to Memphis "flew" kids to the "North Pole" and hosted festive celebrations in hangars, including a special trip for kids in Puerto Rico. Each event is organized by Delta people from across a number of divisions who volunteer their time to bring cheer to children and families in their local communities across the country.

At the 36th annual Holiday in the Hangar in Atlanta, Delta elves hosted 80 kids and 26 house parents from Christian City and Calvary Children's Home for a holiday event earlier this month. In addition to receiving gifts and stockings, kids got to enjoy the day with face painting, a photo booth, caricatures and even Coke floats, along with entertainment by Gutsy the Flying Fox and music by emcee Wayne. Delta santas and elves also delivered gifts to and took photos with more than 350 older adults at the Santa Walk Around at Christian City Convalescent Center.

Earlier this month in Boston, Delta and Massport employees hosted 350 Make-A-Wish kids and families from Massachusetts and Rhode Island for the ninth annual Holiday Wonderland Party. Wish kids got to check out a Delta airplane cockpit, State Trooper cruiser and Massport fire truck. To top it all off, Santa and his elves made a surprise visit from the North Pole – Santa heard kids' holiday wishes and handed out presents. 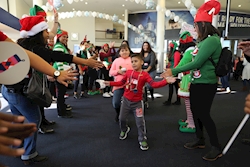 In Los Angeles, 80 Delta volunteers hosted the seventh annual Holiday in the Hangar event for kids from Children's Hospital Los Angeles and P.S. ARTS earlier this month. At this special event, 150 children boarded a plane to the North Pole. Upon arrival to the winter wonderland, the children were greeted by special guests including actress and Black-ish star Yara Shahidi, LA Lakers Alumni A.C. Green and The Lakers Girls, the LA Kings Ice Crew, team members of the Los Angeles Football Club, characters from the Trolls movie and more. During the event, kids got to make crafts from Yoobi, enjoy activations from GRAMMYs ® and the GRAMMY Museum®, and snacks from Sprinkles Cupcakes and Westfield. Santa, Mrs. Claus and the elves also handed out gift bags to every child in attendance.
For the eighth year, in Memphis, Delta people and the Memphis International Airport Authority invited 56 patients and their families from St. Jude Children's Research Hospital to travel on a Fantasy Flight to the North Pole. During the flight, kids sang carols and read "Twas the Night Before Christmas." Once they arrived, kids got to meet Santa, along with University of Memphis Tigers Spirit Squad, the Memphis Redbirds' Rockey the Redbird, Memphis Elite cheerleaders, the Chick-fil-A Cow, Suzuki Music Makers Orchestra and the West Tennessee Therapy Dogs. 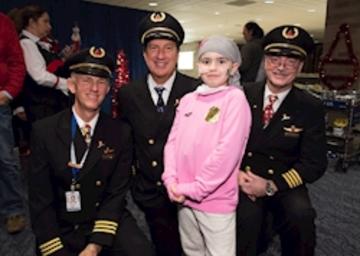 "From a winter wonderland in Los Angeles to magic in Minneapolis, these festive holiday events are an important way we give back during the holidays to local kids and families," said Tad Hutcheson, Managing Director – Community Engagement. "Each event is led by Delta volunteers – their hard work to spread joy exemplifies Delta people's commitment to service in the communities where we live and work."

More than 100 kids from the Children's Home Society of Minnesota took the MSP Fantasy Flight to the North Pole with Delta elves in Minneapolis last week. Partnering for over 20 years, this annual event includes games, magic and treats at a carnival, followed by a trip to the North Pole to meet Santa and Mrs. Claus. 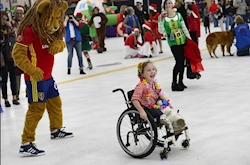 Working with Primary Children's Hospital and Shriner's Hospital for Kids, 120 Delta volunteers in Salt Lake City took 50 kids and their families on the SLC Santa Express. After a quick flight to the North Pole, kids got to make crafts and take pictures with Santa. Children even met some of Santa's friends, including Coca-Cola Polar Bear, mascots from Utah Jazz, Salt Lake Bees, Real Monarchs, Brigham-Young University (BYU), along with cheerleaders from the University of Utah and BYU. Delta people adopted the kids and their families, bringing holiday gifts to those in need. 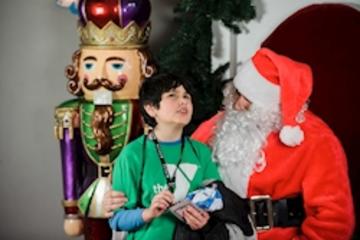 Just last week, Delta and the YMCA of Greater Seattle hosted a Holiday in the Hangar event for more than 125 kids from three local elementary schools in Seattle. Following a flight to the North Pole, the children enjoyed an afternoon of holiday fun, including games, entertainment and visits from special guests such as a magician, carolers, Sea Gals from the Seattle Seahawks, Coca-Cola Polar Bear and Santa Claus.
Related Topics: