Delta employees from across the country will build or renovate affordable, single-family homes in partnership with Habitat for Humanity International this fall. 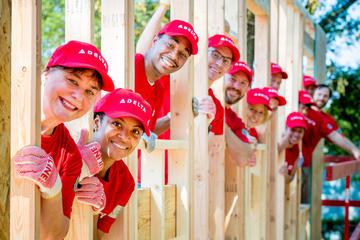 The annual builds will take place in six cities, including Delta’s hubs in Atlanta, Detroit, Minneapolis-St. Paul, New York City and Seattle and Los Angeles. More than 2,400 Delta employees will participate in the projects, which began Sept. 7 and will continue through Nov. 17.

“Delta is invested in giving back and making a difference in the communities where our employees live, work and serve,” said Tad Hutcheson, Delta’s Managing Director – Community Affairs. “I am proud of our employees for donating their valued time and talents to help build homes in partnership with families from coast to coast.” 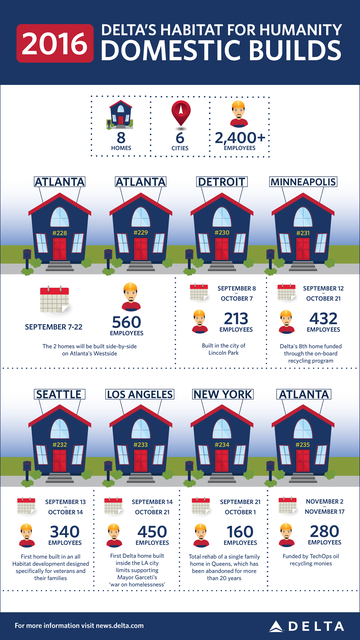 Projects include an all-Habitat development for military veterans and their families in Seattle; a home in Atlanta funded through TechOps' oil recycling initiative and two additional homes built side-by-side in Atlanta's Westside; and a home in Minneapolis-St. Paul funded by Delta's on-board recycling program. Additionally, Delta employees will help rehab a home in Queens, New York, and build a home in Los Angeles. The Los Angeles project will mark Delta's first build inside the city limits.

Delta employees have helped build or rehab 227 Habitat homes in 12 countries around the world. The domestic builds will mark homes 228-235 for Delta. Habitat is one of Delta's core community partners as it acknowledges the need for safe, decent and affordable shelter around the globe.

Earlier this year, Delta announced it will contribute 1 percent of its net income from the previous year to key charitable organizations, including Habitat for Humanity. This commitment will be fulfilled through cash contributions and in-kind travel, as well as grants from The Delta Air Lines Foundation. In 2016, Delta is projected to give $37 million to charitable organizations worldwide.