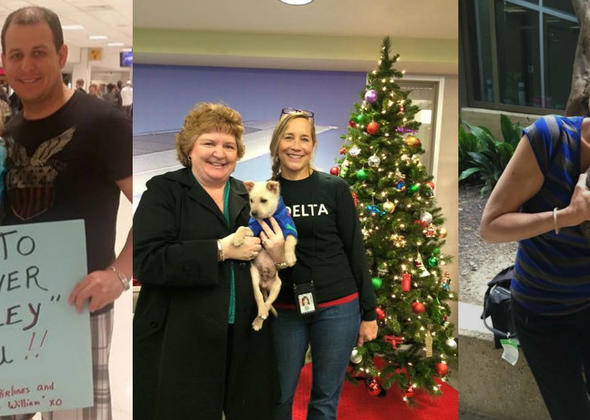 A group of Delta employees and retirees have been using their travel pass privileges for good – by helping shelter dogs and cats find their ‘fur-ever’ homes across the U.S. – and it all started with one puppy named Buddy Love.

“They asked if I’d be able to help transport a puppy to a family in Montana using my employee pass privileges,” Staton said. “If he wasn’t adopted by the following day, he would be euthanized.”

So, Staton flew to Panama City, Fla., to pick up the pup named Monty, later renamed Buddy Love, bought him a scarf and took him across the country to his soon-to-be family in Kalispell, Mont. When she arrived, Staton received a greeting unlike any she had before.

“As a flight attendant, you always see welcome home signs but never expect that kind of treatment yourself,” she said. “The family was all smiles when they saw Monty and had a big sign that said, ‘Welcome Erica and Monty!’ To see them so happy made the whole trip worth it.” 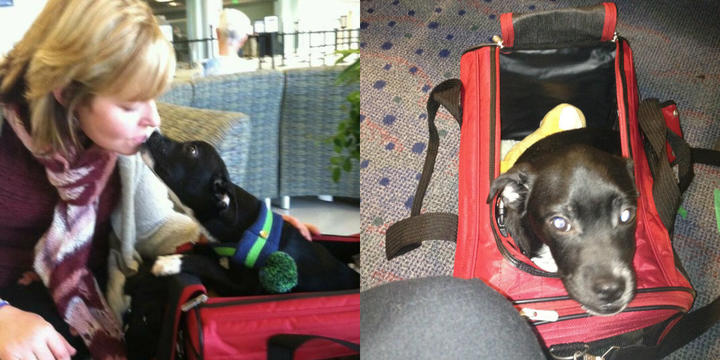 Since that first transport, Staton decided to form a rescue group for animal lovers like her and founded DART with now-retired Delta Flight Attendant Jean Hornsby. Today, the group has grown to more than 4,000 members, according to its Facebook page.

DART transports rescue dogs and cats to their adoptive families around the country, using the members' travel pass privileges while on their own spare time. (Delta employees may fly for free on standby, provided the flight is not sold out.) Although DART is not Delta sponsored, the nonprofit organization is largely made up of active and retired Delta employees from across the airline. Volunteers fly the animals on domestic flights in carriers underneath the seat.  All rescue animals must adhere to Delta’s pet transport requirements.

For Staton and Hornsby’s first official transport as DART, they fondly refer to it as “the great pug race”.

After two pugs lost their owner, the flight attendants agreed to transport them from Cincinnati to Reno, Nev., to live with their owner’s parents. Once in Reno, they only had 30 minutes to deliver the pugs before getting back on the plane for the return trip to Ohio.

“We were literally running through the airport with the two saddest pugs you’ve ever seen,” Staton said. “But when we got to the family, they were so thankful. They told us, through tears, that we had brought them an important piece of their son.”

Typical animal rescue transports are done by car and can take days or even weeks, says Staton. Since DART can expedite the transport process by flying the animals rather than driving them, many shelters specifically request the group’s help.

“As of this date, we have successfully transported over 300 dogs and cats that would otherwise have been killed in overpopulated shelters,” Staton said. “We are extremely proud of our group, and our transporters are ecstatic to use their passes to save animals.”