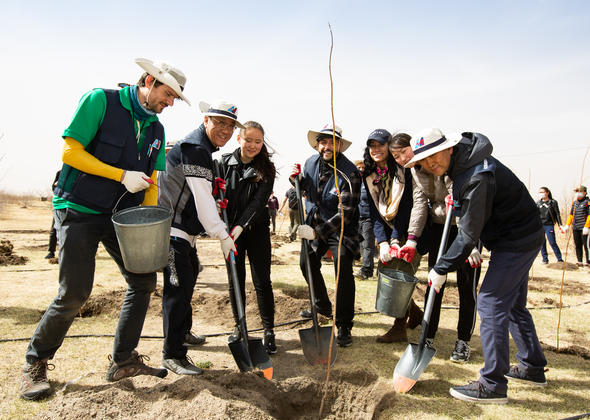 Delta people recently joined counterparts at Korean Air to plant trees in an area of Mongolia that's reclaiming greenspace against a spreading desert. 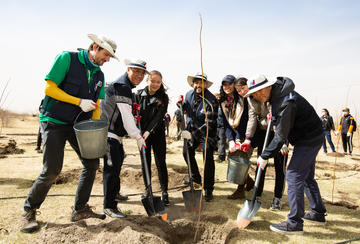 Korean Air invited about 30 Delta Air Lines employees from a dozen locations in Asia and the Americas to work with local residents and students to plant trees in Baganuur, Mongolia. The airlines worked together to mark the one-year anniversary of a joint venture partnership that has expanded choice for customers on both sides of the Pacific.

"We strongly believe that what is good for the planet is good for Delta and our partners worldwide," said Lisa H. Duval, Delta's Managing Director - Asia Pacific, who participated in the project.

Members of Green Up, a Delta employee group promoting environmental sustainability, participated in the planting. "It was an honor to partner with employees at Korean Air on a project to improve the quality of life of a community, as well as the environmental health of the area," said Jesse Miers, President of Green Up.

The planting was just one of a slew of community projects Delta people have undertaken as part of the company's Great Delta Give-Back. All 80,000 employees will receive one day of pay when they volunteer with a 501(c)(3) or international nonprofit organization of their choice. 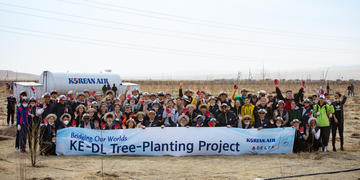 About Delta​ and sustainability

Delta reduces its carbon footprint and reduces waste as part of its environmental sustainability strategy. That's why Delta was honored with the 100 Best Corporate Citizens award from CR Magazine, the Vision For America Award by Keep America Beautiful in 2017, recognized with Captain Planet Foundation's Superhero Corporate Award in 2018, named to the FTSE4Good Index for four consecutive years, included in the Dow Jones Sustainability North America Index for eight consecutive years, and named one of America's 100 most sustainable companies by Barron's.

About the Delta-Korean Air joint venture

The expansive combined network formed by this year-old partnership gives Delta and Korean Air shared customers seamless access to more than 290 destinations in the Americas and more than 80 in Asia.

Delta and Korean Air co-located into the new, state-of-the-art Terminal 2 at Seoul's Incheon International Airport, which serves as a major gateway for both airlines. Delta is the only U.S. carrier to offer nonstop service to four major U.S. hubs from Incheon - Seattle, Detroit, Minneapolis/St. Paul and Atlanta - while Korean Air is the largest trans-Pacific carrier.