Delta extends fan program as Seahawks gear up for playoffs 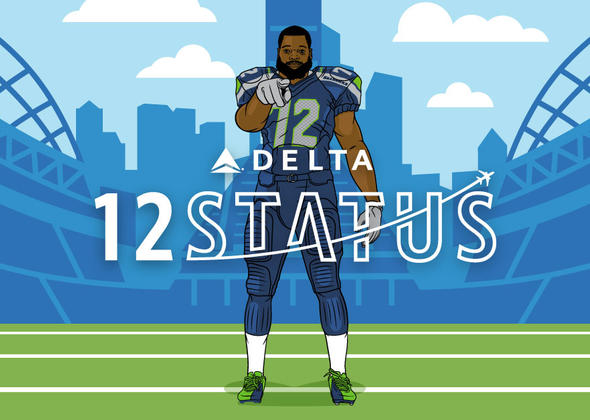 The Seahawks will continue throwing for Delta SkyMiles through the 2017 playoffs after claiming the No. 3 seed in the NFC with a win over the San Francisco 49ers on Sunday.

At the start of the 2016 season, Delta – the Official Airline of the Seahawks – launched 12status, a first-of-its-kind fan engagement program that allows Seahawks fans to earn Miles, merchandise and exclusive perks just for being a fan. Since then, nearly 30,000 members have earned close to 50 million SkyMiles based on the Seahawks’ home passing yards.

But there are more opportunities to earn – Delta has extended the program for all Seahawks playoff games as the team aims to secure a second league championship. Fans will earn 1 mile for every passing yard and 500 bonus miles with every 12,000 members that sign up at www.12status.com. Miles can be redeemed on the nearly 150 peak-day flights to 44 destinations Delta offers from Sea-Tac.

Fans will also continue to receive priority boarding during the football season for all flights out of Sea-Tac.

In 2015, Delta and the Seahawks celebrated the extension of their partnership. Delta provides charter service for the team to and from each road game. Delta is also represented at CenturyLink Field with a wraparound entitlement space and the Delta Sky360 Club, which spans the entire Club Level at CenturyLink Field. The airline also supports the team’s five-state, 48-station Delta Air Lines Radio Network.

Delta is the largest global carrier at Sea-Tac and has more than tripled flights and destinations at its Seattle hub since 2012. Delta offers more than 150 peak-day departures to more than 40 destinations from Seattle, and every Delta flight from Seattle features jet service with Delta One/First Class and Delta Comfort+ seating. Free entertainment is available via Delta Studio, and Wi-Fi service is available on all long-haul international flights and every domestic aircraft operating in the contiguous U.S. from Seattle. The airline opened a new Delta Sky Club located between Concourses A and B in late 2016. The airline’s expansion at Sea-Tac is estimated to contribute $571 million annually in total economic output.