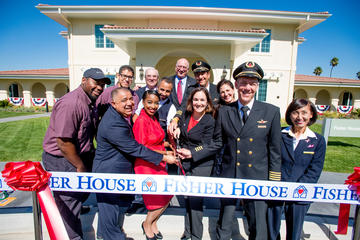 “Delta is committed to giving back to the communities where we live, work and serve,” Debel said. “With more than 10,000 veteran and active military employees, Delta is a longtime supporter of the U.S. Armed Forces and a proud partner of Fisher House Foundation. We are honored to have played a role in the opening of a Fisher House in Long Beach, and we know it will be a valuable resource to the community for years to come.” 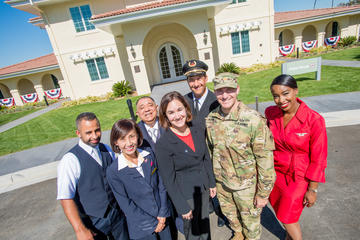 Delta has been involved with the facility since inception, contributing significantly toward the construction of the facility and participating in a groundbreaking ceremony in October 2015. The airline also helped to fund a Fisher House at the Joint Base Lewis-McChord in Seattle in 2015.

"Four years ago this house was a twinkle in our eyes,” Kuykendall said. “After thousands of volunteer hours and donations across the spectrum of givers and geography, we are smiling as we watch the VA Long Beach Fisher House begin a long career serving veterans and their families."

Fisher House Foundation is best known for a network of comfort homes where military and veterans’ families can stay at no cost while a loved one is receiving treatment. The new 16-suite facility in Long Beach offers bedrooms that come equipped with private, handicapped-accessible bathrooms and common areas including a spacious kitchen, large communal living, dining and family rooms, laundry room and patio. The newest Fisher House joins the more than 70 such homes operating in the United States and Europe at or near major military and VA medical centers.