Rachell A. is a 15-year-old high school student who dreams of being a pilot – a dream that less than 40 years ago would have been just short of impossible.

In celebration of Girls in Aviation Day this past Saturday, Rachell and 120 girls who attend aviation schools or are involved with Delta’s non-profit partners across New York City took to the sky aboard a Delta charter from New York to Washington, D.C. 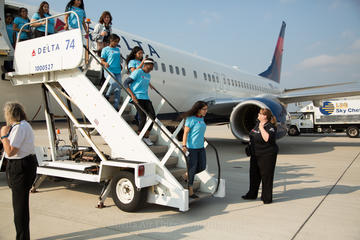 But this wasn’t any ordinary charter – this was Delta’s second annual Women Inspiring our Next Generation (WING) flight, and every aspect of it was led by women. From charter coordinator and dispatchers to below-wing agents and pilots, girls made it happen.

“There's a huge possibility that somewhere in the world an all men's staff is prepping and flying a plane,” Rachell said. “But this is just wonderful; we have an all-female staff. Do you know how rare that is?”

The group of girls joined female employees from across Delta to discuss opportunities in aviation, including aircraft maintenance technicians, engineers, airport customer service agents, flight attendants, pilots and more. Some of the girls in attendance even experienced flight for the first time. 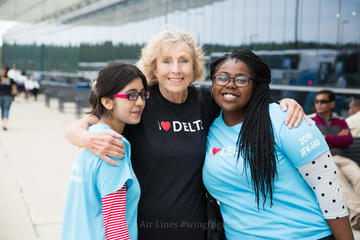 A highlight for those in attendance was meeting a true pioneer for females in aviation, Joy Walker, Delta’s first female pilot. Walker began flying for the airline in 1973, fighting gender stereotypes while pursuing her love of aviation and adventure.

Now retired, Walker flew with Delta almost 30 years, becoming the airline’s first female Captain. She was thrilled to join the WING flight for the second year.

The flight encouraged girls to follow their dreams and was a fun-filled day of giveaways, exploration and inspiration. Currently only 5 percent of pilots in the U.S. are female. The WING flight is just one way Delta hopes to encourage girls to consider a career in the flight deck or in any number of other aviation roles.

“The best part for me is seeing the enthusiasm on the young girls’ faces and knowing what an encouragement the WING flight can be for their future careers in aviation,” Walker said.