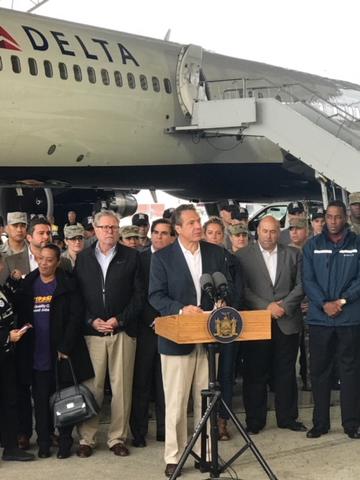 The flight, which also carried the president and CEO of the New York State Power Authority, a 28-member power restoration team, and dozens of state police, marked Delta's third humanitarian mission from New York's JFK Airport in nearly as many weeks.

Delta previously coordinated two humanitarian flights to San Juan from JFK in early October, delivering a contingent of more ­than 150 state troopers, emergency and FEMA personnel, and medical and other necessary supplies to the island.

New York is home to the largest Puerto Rican community outside the territory itself, and Gov. Cuomo has been active in statewide efforts to provide a range of assistance measures, from raising money and donating supplies to setting up airport help desks to aid residents of the island who are arriving in New York.