Gate Gourmet produces 250 million meals for its airline clients every year. Of those, more than 600,000 are made at its facility at London Heathrow for customers flying in the Delta One cabin.

Delta’s relationship with Gate Gourmet expands beyond its London base to 45 destinations around the world, which produce more than half of Delta’s meals across the globe. Although smaller than the kitchens close to Delta’s U.S. hubs, the Gate Gourmet team still faces the same procedures and pressures to get every meal to every flight safely and on time. 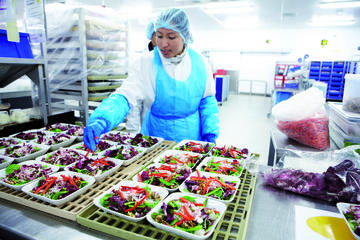 When Delta recently opened the doors of Gate Gourmet to a group of UK journalists, they were surprised at just how calm the kitchens were. Yes, they are a hubbub of activity, given it’s not only Delta’s 10 daily flights they’re catering to but a raft of other airlines as well. Delta’s meals are made in the evening ready for loading on to flights during the one-hour-and-45-minute turnaround time each aircraft has at Heathrow.

“To our surprise, the process was so thought through that we were beyond amazed – you would have thought it would be slightly chaotic with a lot of shouting and screaming but we can rest assure you all Gate Gourmet staff where cool, calm and extremely organized,” said Christabel Phillips from House of Coco.

Benedict Montgomery of travelwithben.com agreed: “It was really interesting to watch the whole process unfold right in front of me. You'd think that a large warehouse would be chaotic dealing with the catering operation for multiple airlines all at once; but it was surprisingly very calm and organized.”

It’s a highly controlled environment inside the kitchens to ensure both the safety and freshness of the dishes. For this reason, the food is placed in cold stores. Once loaded on the carts, a label is placed on the top of the trolley so flight attendants know what is in each one and where on the aircraft it should be loaded. They also receive cooking and plating instructions to ensure each dish is as near to restaurant quality as can be achieved in aircraft conditions.

In the ground kitchen, hygiene rules dictate that food must be cooked to 75 degrees Celsius, but on board, aircraft ovens need to be heated up to 160C. Beef must be cooked onboard for 22 minutes, and fish for 18.

“Fish is one of the most difficult foods to serve on board and because of cooking regulations, we can’t use all varieties as they are too delicate. That’s why we stick to varieties including salmon, cod and monkfish,” said Michael Sandbrink, Delta’s Manager ­– Catering Operations, EMEA.

It’s well-known that taste buds are diminished at altitude, so what do the chefs do to combat this in the kitchen?

“We focus on umami – the sixth sense,” said Paul Kight, Head Chef at Gate Gourmet UK. “There’s lots of ways you can introduce taste to food, such as using broths and bouillons help retain their flavor when eaten in the air.”

Building a menu fit for a flyer

One thing is for sure, no Delta One passenger should arrive to the United States hungry. On all international flights, Delta One customers are offered a welcome drink on arrival – a choice of sparkling wine, mimosa, beer or orange juice. After take-off the full service then commences, starting with an appetizer and drink. This is followed by a starter and soup course from the trolley before a passenger’s choice of entrée is served direct from the kitchen. Each flight has four options, including a vegetarian dish. The meal is rounded off with a choice of dessert, fruit and cheese or Delta’s famous ice cream sundae, accompanied by tea, coffee or liquor. 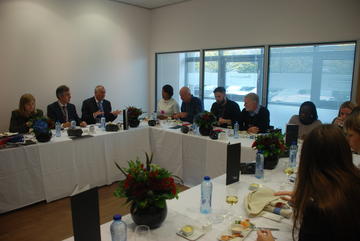 For the journalists, the pasta and beef tenderloin main courses were the dishes of the day.

“I’m so used to having curries and stews on flights that these dishes make a refreshing change,” said Rupert

Parker from Planet Appetite. “The cod had a great flavor too – and goes to show that you can offer fine dining on aircraft.”

Mid-flight, flight attendants set out snacks in the Delta One galley for people to help themselves. These vary from fruit to chips and chocolates. Flight attendants also serve warm chocolate chip cookies – the smell of the melting chocolate wafting through the cabin tempts many a flyer.

But the crew is not done yet. About 90 minutes before landing, the second service begins. Like all menus, these change four times a year. The current selection is mixed greens salad with salmon and pita chips or lobster sliders.

“Lobster is obviously a high-end and expensive product, so we had to put a lot of thought into this choice,” Michael Sandbrink said. “But we decided that while our customers expect the best, they wouldn’t expect to see lobster, and it has been worth the investment.”

This decision, like the rest of the menu, begins with the twice-yearly chef demonstrations. Think MasterChef or My Kitchen Rules – each chef presents their proposed dishes, and Delta’s culinary team judge whether they will be a hit in-flight. 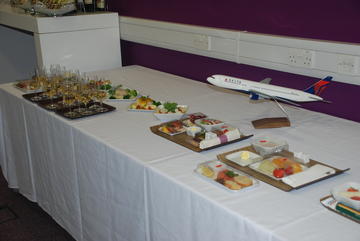 Once the menus are chosen, Delta’s Master Sommelier has the enviable task of tasting more than 1,600 wines each year to pair with the dishes. Each flight has a choice of two white, two red, a champagne and dessert wine. Once short-listed, the potential wines are tasted on board to see if they can hold up at altitude.

After several months in the making, Delta’s menus come together for passengers to enjoy, sometimes over a period as short as five hours.

The team is already working on the next refresh – will the pasta triumph again?