Delta employees proudly rallied behind this year’s Pride events slogan, “Give love wings and let it fly,” along with the diversity, acceptance and inclusion it symbolizes at corporate-sponsored events in June throughout the U.S. and Canada.

“Delta employees came through on a global scale this month for values that are core to our company and what it stands for,” said Tad Hutcheson, Managing Director – Community Engagement. “We know that a huge part of our success is our culture of inclusion. Our diversity strengthens and defines us.”

For the first time, Delta served as the Official Airline and sponsor of the Boston Pride Festival, a co-branded initiative with partner Virgin Atlantic. In addition, they partnered to support Seattle and New York City Pride events. They will partner again to support of London’s LGBTQ community next month and Atlanta Pride in October.

Delta’s 2017 Pride Support by the Numbers: 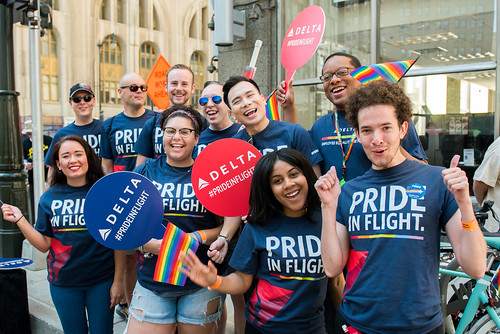