Delta and its employees have been showing support for victims and their loved ones following the tragic events in Orlando Sunday, including flying the Pride flag to half-staff at the airline’s Atlanta General Offices.

To assist families of the victims with their travel plans, Delta is offering situational flexibility based on individual needs. Customers or their travel agents can contact Delta Reservations or Sales Support for assistance.

“We all hurt and mourn for those lost in Orlando as well as the numerous victims, some who remain critical,” said Michael Long, President of Delta’s Employee Equality Network (DEEN) Group, in a note to all members. “At a time when we are celebrating LGBT Pride in three countries and across the United States, it’s important to not lose sight of who we are.  We must not turn our hurt into hate. The entire DEEN leadership team is here to support you. Also, remember that Delta offers the Employee Assistance Program, which offers counseling and other services you may find helpful at this time.”

Members of DEEN will be participating in a vigil to remember the victims of the Orlando massacre. The vigil will be held by the LGBT Institute at the Center for Civil and Human Rights in Atlanta on Tuesday, June 14, at 7 p.m.

As part of the airline’s long-time commitment to the Lesbian, Gay, Bisexual and Transgender community, Delta is celebrating Pride Month this month as an official airline sponsor of nine Pride festivals across the U.S. and Canada. This past weekend, Delta sponsored LA Pride, the Cadillac Barbie IN Pride Parade and Circle City IN Pride Festival in Indianapolis, and Motor City Pride in Detroit. 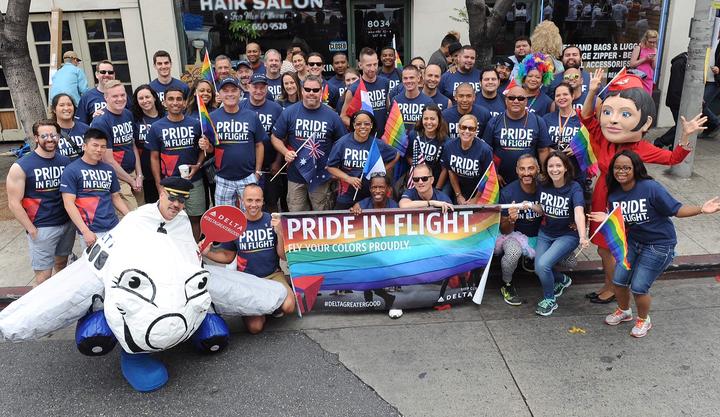 "With Delta's strong showing at LA Pride, we demonstrated our resolve that even amidst violence, intimidation and hate, we will stand up for the rights of the LGBT community and celebrate our diversity,” said Ranjan Goswami, Vice President – Sales-West. “I was both humbled and heartened to see the courage and fortitude of the Delta family."

For several years Delta has teamed up with some of the largest regional Pride events around the world. In addition to this weekend’s events, 2016 partnerships include the Nashville Pride Equality Walk, NYC Heritage of Pride, Seattle PrideFest, Seattle Pride, Twin Cities Pride in Minneapolis, Utah Pride Festival in Salt Lake City and The 519's Green Space Festival at Toronto Pride.

Delta is also the Official Airline of Atlanta Pride, the Official Sponsor of Tokyo Rainbow Pride, the presenting sponsor of the GLAAD Media Awards and a Platinum Sponsor of the International Gay and Lesbian Travel Association. Additionally, Delta supports LGBT efforts as a sponsor of GNETWORK 360 in Argentina and the Brazilian Association for Gay Tourism. Employees are also participating in non-Delta sponsored Pride events elsewhere throughout the country.

Representatives of DEEN in each city as well as friends, family and volunteers don Delta gear to march in the parades each year.