ATLANTA, Nov. 8, 2012 /PRNewswire/ -- Delta Air Lines (NYSE: DAL) tonight will honor 100 of its top employees at its 2012 Chairman's Club gala at the Fox Theater in Delta's hometown of Atlanta. Induction into the Chairman's Club is Delta's top honor in employee recognition.

"Delta has incredible momentum heading into the New Year, and much of that can be attributed to the collaborative efforts of Delta's dedicated and high-performing employees," said Richard Anderson, Delta's chief executive officer. "Our 2012 Chairman's Club honorees are a perfect example of how Delta employees live the values of this great enterprise as they serve our customers each day."

Honorees are nominated by their colleagues and selected based on their embodiment of Delta's values and principles, their distinguished contributions to the company, their dedication to their community and their exceptional service to Delta's customers. Honorees live and work in communities across the globe, including Frankfurt, Germany, Bangkok and Delta's hub at Narita International Airport in Tokyo.

Honorees will enjoy a red carpet entrance across Peachtree Street to the Fox Theater, with hundreds of their colleagues lined up in support.

The Chairman's Club, now in its 16th year, is part of Delta's commitment to recognize top performers, build a better airline and continue to build a great place to work for its more than 80,000 employees worldwide.

Delta Air Lines serves more than 160 million customers each year. During the past year, Delta was named domestic "Airline of the Year" by the readers of Travel Weekly magazine, was named the "Top Tech-Friendly U.S. Airline" by PCWorld magazine for its innovation in technology, won the Business Travel News Annual Airline Survey and was the recipient of 12 Executive Travel Magazine Leading Edge Awards for U.S. airlines. With an industry-leading global network, Delta and the Delta Connection carriers offer service to nearly 313 destinations in 58 countries on six continents. Headquartered in Atlanta, Delta employs 80,000 employees worldwide and operates a mainline fleet of more than 700 aircraft. A founding member of the SkyTeam global alliance, Delta participates in the industry's leading trans-Atlantic joint venture with Air France-KLM and Alitalia. Including its worldwide alliance partners, Delta offers customers more than 13,000 daily flights, with hubs in Amsterdam, Atlanta, Cincinnati, Detroit, Memphis, Minneapolis-St. Paul, New York-LaGuardia, New York-JFK, Paris-Charles de Gaulle, Salt Lake City and Tokyo-Narita. The airline's service includes the SkyMiles frequent flier program, a world-class airline loyalty program; the award-winning BusinessElite service; and more than 50 Delta Sky Clubs in airports worldwide. Delta is investing more than $3 billion through 2013 in airport facilities and global products, services and technology to enhance the customer experience in the air and on the ground. Customers can check in for flights, print boarding passes, check bags and review flight status at delta.com. 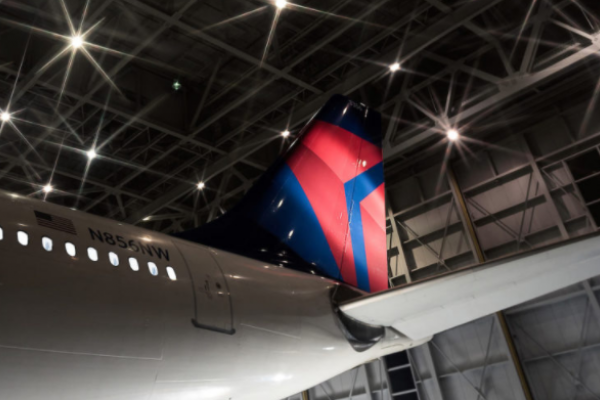