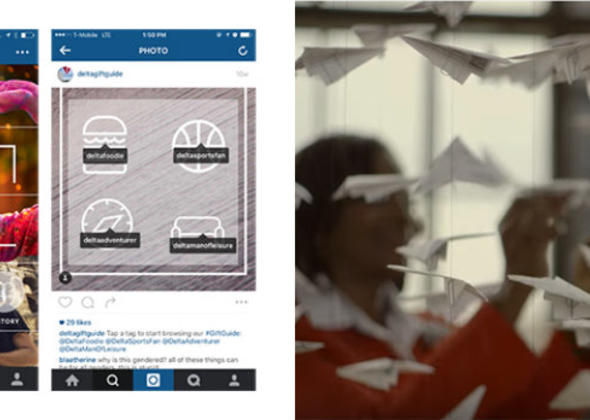 The Atlanta Advertising Awards, or ADDYs, is a branch of the American Advertising Awards that recognizes creative excellence across Atlanta. This year, more than 70 agencies and brands submitted work for consideration.

Delta’s Gift Card campaign won a gold ADDY in the Social, Single Platform category. The holiday campaign was based around the idea that experiences are more treasured than things, and as an airline, Delta enables memorable experiences every day. To bring the idea to life, the Digital Marketing team created The World’s First Gift Guide with Only One Gift: the ‘Anywhere for Anyone’ Delta Gift Card. Instagram users could explore 12 different personality types and destinations that might appeal to them, all of which would be attainable with a Delta Gift Card.

The airline also took home a Silver ADDY for its 2014 ‘Amazing Year’ holiday e-greeting card in the Film Video and Sound – Internet Commercial category. Boarding passes folded into thousands of paper planes created a stunning visual, while a stirring narration by Donald Southerland conveyed Delta’s sincere appreciation for its customers.

Delta Studio also took home a Silver ADDY in the Interface & Navigation category, and Delta received a Bronze ADDY in the Responsive Design category for its LAXtoLUX campaign in support of the new terminal at LAX.

ADDYs are awarded solely on the creative quality of the work itself – results and strategy are not considered. According to the American Advertising Awards, a Gold ADDY is awarded in recognition of the highest level of creative excellence and is judged to be superior to all other entries in the category. Entries that are also considered outstanding and worthy of recognition receive a Silver ADDY.