Earlier this week, more than 200 student volunteers from Indiana University teamed up with Delta to build about 50 new bikes to benefit a Bloomington, Ind., nonprofit.

The event took place ahead of the annual Little 500, a bicycle race held on campus every April. Often billed as the “greatest college weekend in America,” the race was founded in 1951 and today is attended by more than 25,000 fans.

Last year, Delta signed exclusive agreements with nine universities across the country, including IU, to embed the airline and its employees in campus and alumni events, academics, career recruiting and counseling, all in an effort to become a lifelong travel partner to future customers. 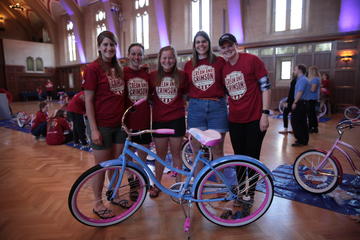 Nearly 20 Delta people, including a team of employees from nearby Indianapolis International Airport, joined the students at Alumni Hall, in the Indiana Memorial Union, to lend their bike-building expertise.

“Delta is proud to partner with IU and thrilled to participate in the excitement of Little 500 through this first-ever ‘Build-a-Bike’ event during race weekend,” said Jake Abel, Delta’s General Manager of University Marketing. “It’s a fun way for IU students to give back and to promote health and wellness to additional members of this great community. We are looking forward to giving students, alums and Little 500 fans a new opportunity to get to know our airline.”

“This is a great partnership between the IU Student Foundation and Delta, benefitting young people in our community,” said McRobbie in an IU release about the event. “I’m honored to be a part of it.” 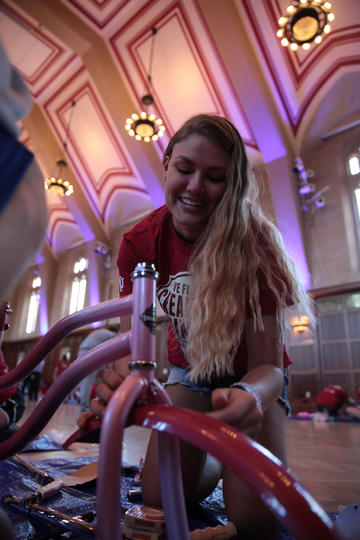 Philanthropy always has been at the heart of Little 500, which supports scholarships for working IU students. The finished bikes will be going to girls in the after-school program of Girls Inc. of Monroe County. The girls will receive the bikes in a surprise ceremony today at Bill Armstrong Stadium after the women's Little 500 race.

Delta’s TechOps team in Atlanta assembled nearly 700 bikes in support of the U.S. Marine Corps Reserve Toys for Tots mission last year, but this is the first time Delta has taken a bike build on the road.