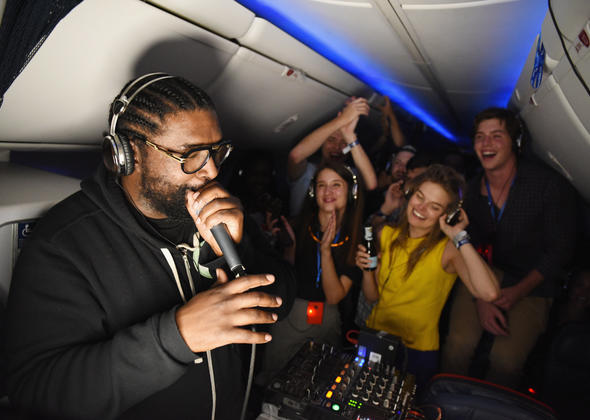 Delta invited New Yorkers to “LSTN up to get down” on Tuesday as the airline hosted the first-ever in-flight silent disco at 30,000 feet. DJ’d by Roots band member Questlove and emceed by renowned hip-hop music producer Yameen Allworld, the on-board party was in celebration of Delta’s partnership with LSTN Sound Co. Delta’s new stylish, noise-canceling headphones officially began rolling out onboard July 17 for customers in Delta One, including transcontinental flights between JFK and LAX/SFO, DCA-LAX and BOS-SFO.

The 90-minute flight above New York City, which departed and arrived at New York’s John F. Kennedy Airport, comprised of more than 100 music-loving customers, a select group of music students from NYU, LSTN executives and other VIP’s who danced down the aisles to Questlove’s curated playlist, which featured a mix of new hits and classic tracks. 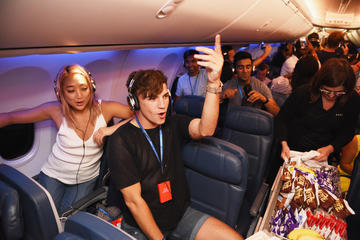 Guests were treated to a Delta experience from takeoff to touchdown, enjoying a pre-departure meal from partner Union Square Hospitality Group, which included offerings from its “Best of USHG” summer menu, and on-board snacks from Kind and Murray’s Cheese. Attendees were also treated to an assortment of beverages, including the airline’s signature craft beer from Brooklyn Brewery and, during a celebratory toast, Lamarca Prosecco, one of the airline’s new sparkling wine offerings.

Through its partnership with LSTN the airline also supports Starkey Hearing Foundation, LSTN’s philanthropic partner who provides ear care and hearing aids to those in need around the world. Over the past four years, LSTN has partnered with the Starkey Hearing Foundation to provide hearing aids to more than 22,000 people, and will enable thousands more to receive the gift of hearing by donating part of the proceeds from its partnership with Delta to the nonprofit.

Later this fall, the headphones will also be available in Delta Premium Select, which will debut on Delta’s first Airbus A350.

LSTN headphones are the latest offering to be introduced as part of Delta’s ongoing multi-billion dollar investment in the customer experience that includes a cabin modernization program featuring new seats, seatback entertainment systems with free entertainment, high-capacity overhead bins, access to Wi-Fi on nearly all flights, free Main Cabin meals on select flights, upgraded free Main Cabin snacks, chef-curated meals and a seasonal wine program in Delta One, an Alessi-designed collection of serviceware in Delta One and First Class, and more.

Delta has made significant investments in the customer experience on the ground, in addition to plans to add nearly 250 new aircraft to its fleet in coming years. These include new Delta Sky Club locations in Denver, Atlanta and Seattle and Club renovations in Nashville, Dallas, Newark and Minneapolis-St. Paul; airport enhancement programs in Atlanta, Los Angeles, New York and Salt Lake City and the testing and implementation of an enhanced boarding process in Atlanta.