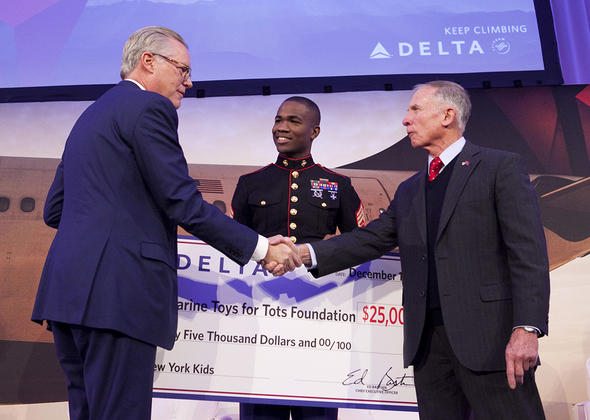 NEW YORK - “Thanks for making us the most investible airline in the space.”

That’s how Delta’s CEO Ed Bastian welcomed more than 100 attendees at Delta’s annual Investor Day on a cold December morning in the financial center of the U.S., Manhattan, just miles away from the airline’s New York City hubs at LaGuardia and JFK.

Bastian and four other Delta executives spoke to representatives from investor groups and analysts from JPMorgan Chase, Merrill Lynch/Bank of America and others of how Delta will continue its industry-leading financial and operational performance in 2017. 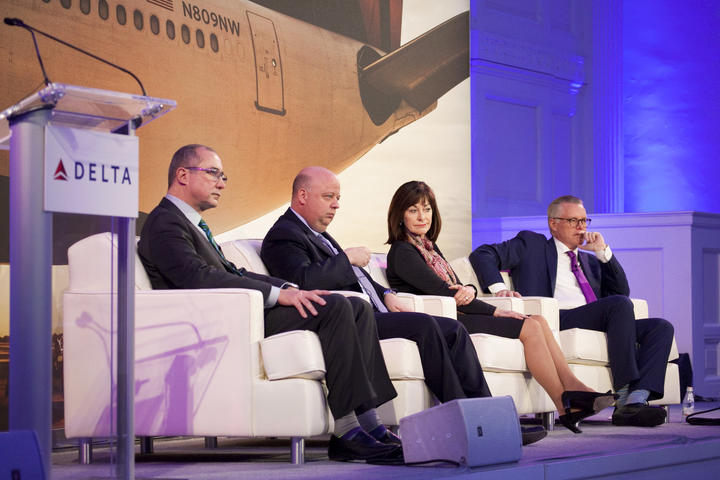 Despite many challenges in 2016, Bastian said Delta is projecting a record $6 billion pre-tax profit for the year.

He and the other leaders emphasized Delta’s strategy in approaching things differently than others, creating a durable business built for long-term success.

Delta issued updated guidance for December on unit revenue - a measure of financial health closely watched by Wall Street – of a 3 percent decline, an improvement over previous guidance of a 3-5 percent decline. Additionally, unit revenues in the first quarter of 2017 are expected to be flat on a year-over-year basis, another improvement.

Thursday morning coverage by Reuters and the Wall Street Journal showed highlights of Delta’s Investor Day presentation along with quotes by Bastian and Hauenstein noting that U.S. customer demand has been up since the November presidential election. 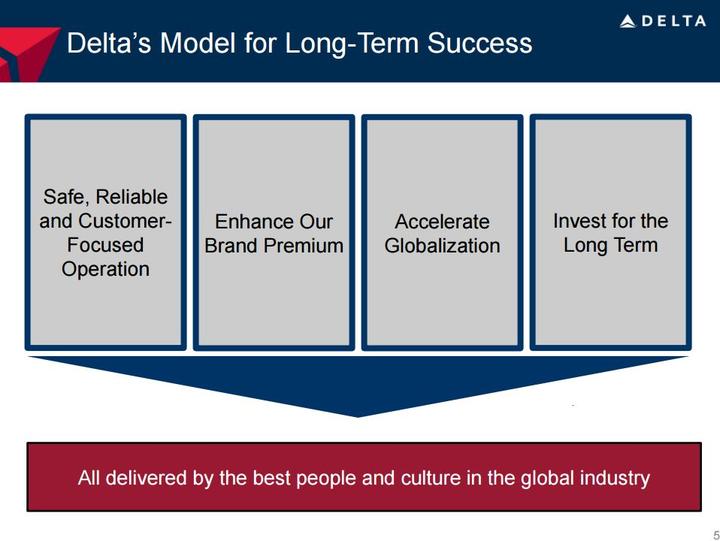 Bastian said Delta people are driving a projected $6 billion profit for 2016 through operations and service excellence despite increases in costs and a challenging pricing environment not seen in several years.

“While 2016 has been a strong year, there are certainly headwinds into ’17,” Bastian said, noting that in 2017 Delta will manage through cost challenges and will be continue to be disciplined about capital investment.

Hauenstein said a noticeable increase in domestic revenue was seen immediately after the results of the U.S. presidential election. “It almost seemed like there was some pent up demand in the system,” he said.

Hauenstein said there is a direct correlation between customers enjoying the experience of flying Delta and the airline’s ability to produce revenue, touting ongoing investments in the on-board product. He said fare segmentation has been a key driver, especially as Delta debuts the A350-900 next year with an all-suite Delta One cabin as well as Delta Premium Select. 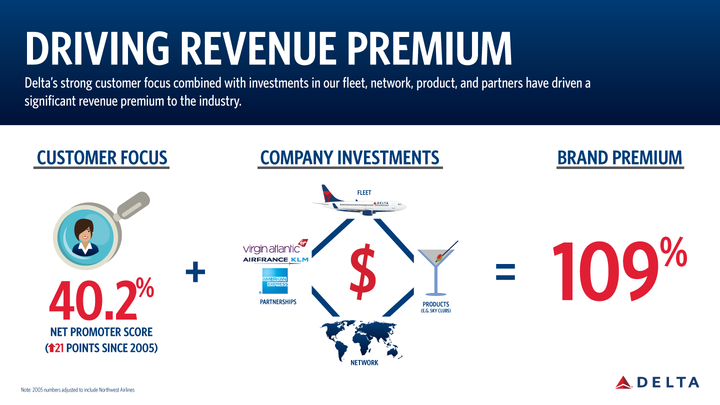 West shared how Delta’s industry-leading operations performance continues to increase the gap between competitors, especially in on-time arrivals arriving exactly on-time - or early - as well as the mounting number of days in which the airline doesn’t cancel a flight.

“We’re solely focused on running the best airline in history,” he said.

West spoke of the Delta TechOps as an anchor to the operation, noting that the complexity of the aircraft fleet TechOps maintains at a low cost is a strong combination. 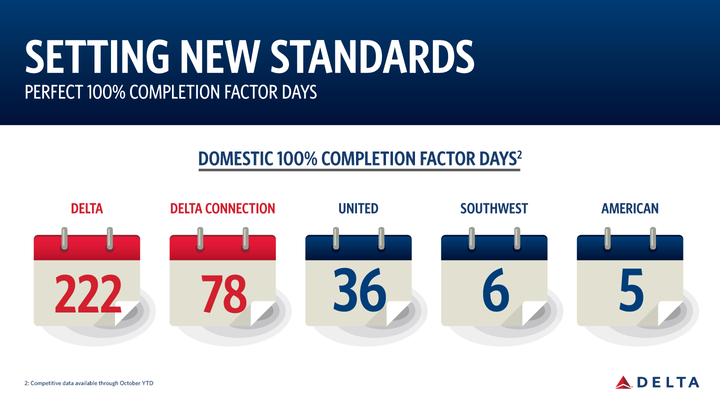 Smith showed attendees how Delta’s employee-focused culture and a track record of investing in employees constitute a competitive advantage and drive a “virtuous circle” of customer satisfaction and shareholder value.

“The people and culture at Delta are enabling our success,” she said. “We are absolutely intentional in how we invest in it, how we care for it and how we sustain it for the long term.” 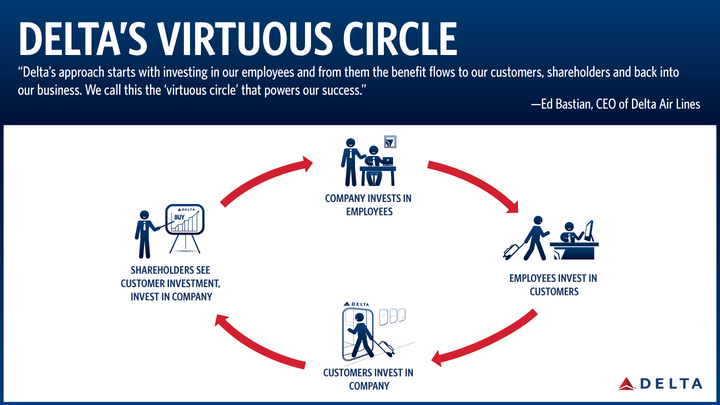 Jacobson’s comments centered on the qualities of high-quality industrial transport company that Delta exhibits. He said Delta’s innovation across the business is one of the reasons it has achieved long-sought investment-grade ratings.

Bastian closed the Investor Day presentation with a check presentation of $25,000 to Marine Toys for Tots as part of the airline’s commitment to give 1 percent of profits annually to charitable organizations in the communities Delta serves. 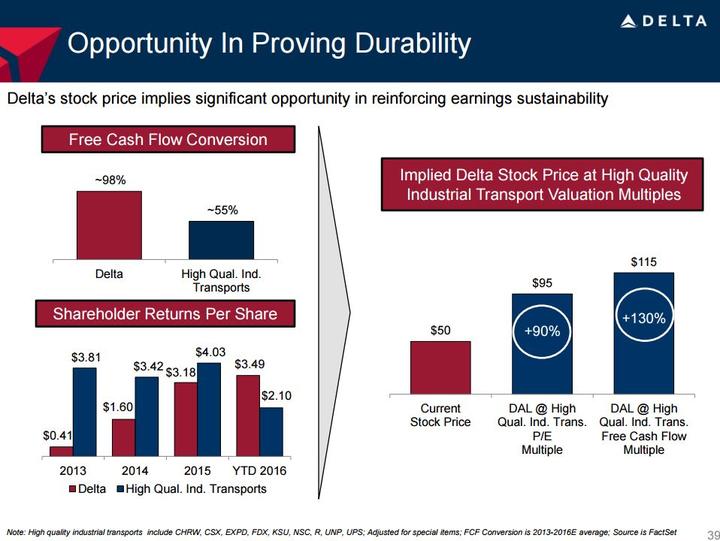