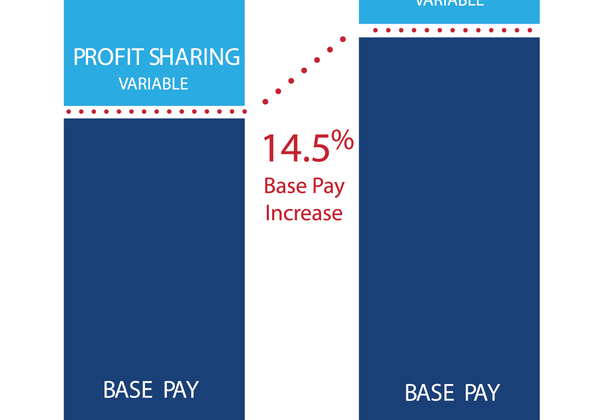 What does an airline do when employees ask for more security and predictability in their pay while still sharing in the company’s success? Simple—it restructures its employee compensation to put more in base pay while keeping a profit-sharing plan that will provide employees with double-digit payouts when the airline meets its financial goals. 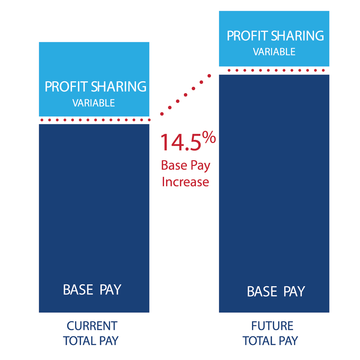 Delta announced today that it is increasing most employees’ base pay by 14.5 percent while continuing to offer a generous profit sharing plan. The company also is increasing its 401(k) dollar-for-dollar match from 5 to 6 percent.

In a memo to employees, CEO Richard Anderson and President Ed Bastian said, “When combined with the April (annual pay) increases, pay rates for most employees will be up 18 percent or more in 2015, providing you with record pay raises in a year of record profits. Few companies can match that.”

Meanwhile, over the past two years Delta has returned over $3 billion to shareholders and has reduced its debt by $10 billion while continuing to invest in aircraft, the onboard customer experience and upgrading facilities worldwide.

1. Delta is responding to employee feedback by putting more money in base pay.

Base pay rates will increase by 14.5 percent for all eligible merit, ground and flight attendant employees around the world on Dec. 1. When combined with the April increases, pay rates for most employees will be up 18 percent or more in 2015, providing record pay raises in a year of record profits.

2. Profit sharing is here to stay.

Delta will match employees’ 401(k) contributions up to 6 percent of pay starting Jan. 1. With automatic and matching contributions from the airline, which together can equal up to 8 percent of employee earnings, the total will add up to 14 percent of an employee’s earnings.