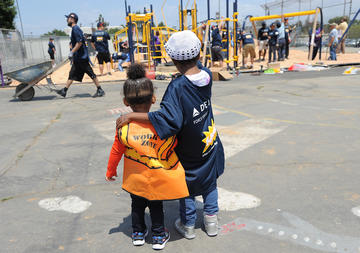 This past weekend, more than 200 volunteers from Delta, the Inglewood Unified School District, organizers from KaBOOM! and the Inglewood community, joined forces in building a playground for the Kelso Elementary School in Los Angeles, California. The build celebrates the airline’s 10th build in partnership with KaBOOM! since October 2013.

The new playground was designed exclusively from drawings by the students at Kelso Elementary in February of this year, and was constructed in just six hours as part of the one-day build. This day marked an important step in providing the more than 600 students of the school with a safe place to be active, playful and inspired.

Ranjan Goswami, Vice President of Sales – West, kicked off the event and highlighted the importance of Delta’s continued investment in the Los Angeles community, with the help of Kelso Elementary School Principal Coffey and the KaBOOM! team leaders. 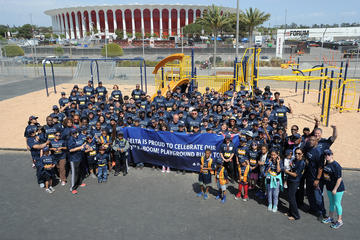 “Today is just another example of positive efforts that Delta is making all across our city,” said Ranjan. “This is our third playground built in the Los Angeles area as part of our investment in the local community. We know how important it is to give back and ensure that youth get the childhood they deserve.”

Throughout the course of the day, more than 17,000 pounds of concrete were mixed, 200 cubic yards of mulch were shoveled, and multiple works of arts works were painted, resulting in the successful assembly of a brand new playground structure for the school.

“Any time that you can provide something for a community, and not do it in years, not in months, but in a day, that is an amazing gift,” said Inglewood Mayor James T. Butts. “We love all the KaBOOM! projects that have been done in the greater Los Angeles area and are so thankful to Delta Air Lines for bringing this important organization here to Inglewood today.”

At the ribbon-cutting ceremony, Ranjan surprised the students, faculty and parents of Kelso Elementary School with a $10,000 donation, which will assist the organization with long-term maintenance of the playground. 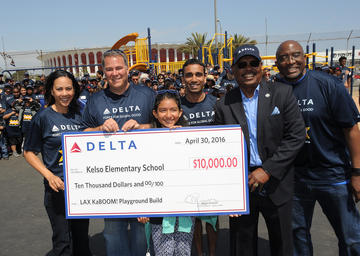 “It is my last year at Kelso Elementary so I am happy that we all came together here today and we made it happen,” said Angela, President of the Student Council. “I put a zipline in my drawing on Design Day and it made it into the playground – I’m pretty excited about that.”

In helping the community through important events like these, Delta continues to demonstrate its strong commitment and pursuit in becoming LA’s preferred airline. In addition to KaBOOM!, Delta supports dozens of organizations that are vital to the fabric of city, including Children’s Hospital Los Angeles, Habitat for Humanity International, Junior Achievement of Southern California and the YMCA as well as serving as the official airline for LA Pride.

KaBOOM! is the national non-profit dedicated to giving all kids – particularly those growing up in poverty in America – the childhood they deserve filled with balanced and active play, so they can thrive. Since 1996, KaBOOM! has collaborated with partners to build, open or improve nearly 16,300 playgrounds, engaged more than one million volunteers and served 8.1 million kids. KaBOOM! creates great places to play, inspires communities to promote and support play, and works to drive the national discussion about the importance of play in fostering healthy and productive lives.