Delta, KaBOOM! give the gift of play in Atlanta

More than 300 volunteers from Delta, as well as parents, teachers and staff from Wesley International Academy and local community members, came together on Saturday to build a KaBOOM! playground as part of Hands On Atlanta Day.

“Today Delta is here at Wesley International Academy, and it’s Hands On Atlanta Day, so there are many projects going on all across the city of Atlanta, and Delta’s project is with our partner KaBOOM!, building a playground in downtown Atlanta,” said Tad Hutcheson, Managing Director – Community Affairs. “When we approached KaBOOM! earlier this year about building a playground in Atlanta, they gave us several options, and we chose Wesley International Academy and then learned we had several Delta parents there, and that just makes it even better.” 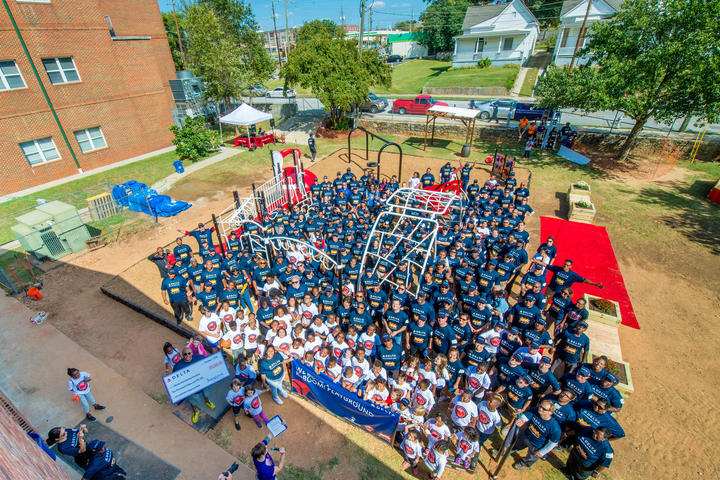 The new 2,500 square foot playground will offer a safe and accessible place to play for more than 780 students at Wesley International Academy, one of the only International Baccalaureate schools in Atlanta. The school offers students education in a single gender classroom with daily instruction in Mandarin Chinese. The playground, which will be accessible to kids in the local community, will impact thousands of kids over the years.

“Delta is the kind of partner that every organization like ours needs,” said Jason Marshall, Executive Director at Wesley International Academy. “We couldn’t accomplish what we are accomplishing today without Delta. We didn’t have a play space, so this will be the first time in the four years we have been in this building that our kids will have a dedicated play space of their own.”

The students were engaged from the start, tasked with drawing the design for their ideal playground at a Design Day held in July. The new playground is exclusively designed from the student’s drawings and displays the school’s logo colors of red, black and gray.

For three Delta employees, this build was especially impactful as they have children who attend the school. Ed Pouthier, Revenue Management, along with Nicole Jones, Information Technology and Jeff Swing, TechOps, also volunteered their time to build a playground for their children.

“Wesley International Academy is a fantastic school, and we love it and the community at Wesley,” said Pouthier in a video highlighting the build. “We live just a few blocks away, and it is a great opportunity to combine our daughter’s school with work at Delta Air Lines.”

At the ribbon cutting, Hutcheson presented a check to Wesley International Academy for $10,000, which will assist Wesley with long-term maintenance of the playground and support the programs the school provides.

“Thank you for everything you’ve done for these kids. They might not understand it now, but this will have a big impact on their lives in the future, so thank you,” said Howard, who spent time in a pick-up basketball game with the kids following the event.

The playground marks Delta’s sixteenth playground build in partnership with KaBOOM! and the airline’s third build in Atlanta.

KaBOOM! is the national non-profit dedicated to giving all kids – particularly those growing up in poverty in America – the childhood they deserve filled with balanced and active play, so they can thrive. Since 1996, KaBOOM! has collaborated with partners like Delta to build, open or improve over 16,500 playgrounds, engaged more than one million volunteers and served 8.1 million kids.