Georgia has been named the Best State For Business for the fifth straight year by Site Selection magazine. Delta's Chief Information Officer Rahul Samant shared Delta's perspective on the award at the press conference Monday where Gov. Deal accepted the distinction.

"At the head of IT for Delta, the war for talent is definitely on nationwide," Samant said. "But here in Atlanta we've hired 200 people in Delta's IT department in the past 12 months and have plans to hire 300 more in the next 12 months. 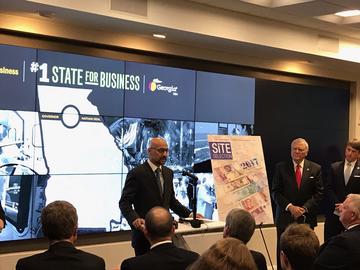 The event took place in the Centergy Building at Tech Square on the Georgia Tech Campus, which is also home to Delta's Global Innovation Center, aka The Hangar. Samant said the work Delta is doing there allows the airline to work directly with Georgia Tech teams, the vibrant start-up community and other partners so it can think big, start small and learn fast in solving for real customer and employee challenges.

"I've been really encouraged by the depth of the talent pool locally," Samant added, "and by our ability to attract talent from other parts of the country because of the quality of life our state has to offer and the types of opportunities available here." 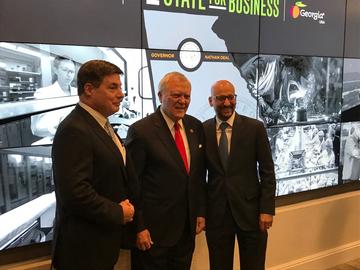 Delta has been a key player in the development of Atlanta's innovation ecosystem over the past few years. In addition to its work through The Hangar at Ga. Tech, Delta has partnered with the Savannah College of Art and Design to reimagine what the future of travel might look like. It is also a founding investor in Atlanta-based Engage Ventures, which is focused on bringing top start-up talent from around the country to Georgia so this region has access to first-mover innovations.

Delta has long been a catalyst for economic development for the region in partnership with the State of Georgia and the City of Atlanta. In 1940, Delta signed a visionary agreement with the City that brought its headquarters here and laid the foundation that resulted in the world's busiest airport. Hartsfield-Jackson Atlanta International Airport's annual economic impact on the region now tops $65 billion every year, and directly and indirectly supports more than 450,000 Georgia jobs. Thanks to Delta's Hub at ATL, with more than 1,000 flights per day to more than 200 global destinations,  Georgia businesses have convenient, nonstop access to top destinations in North America, Europe, Latin America and, now, Asia, with Delta's service to Seoul and Shanghai starting next year, and its nonstop flights to Tokyo.

Samant went on to say that from the airline's humble beginnings as a crop dusting company to the world's most reliable airline, Delta has always been innovating to improve the customer and employee experiences.

​"Being in Georgia makes [innovation] happen easily," he said. "Delta has been able to grow Atlanta to be the largest hub in the world in part due to the business-friendly environment that Governor Deal and the State of Georgia have developed."