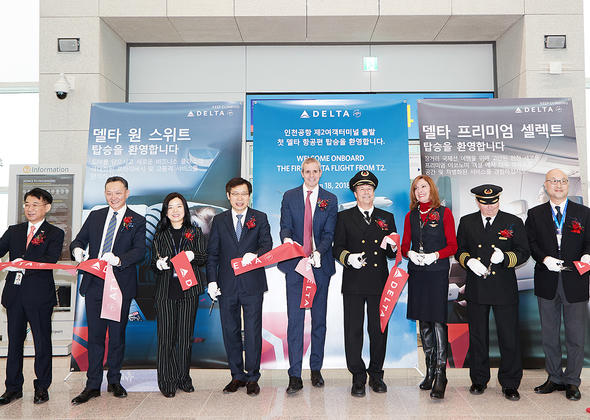 The new 1,260,000 square-foot Terminal 2, designed to handle more than 18 million customers per year, will be used by Delta, Korean Air and Air France-KLM customers. Delta customers traveling through ICN’s Terminal 2 will enjoy an efficient and seamless connecting experience through this state-of-the-art facility, which will include four lounges opened by Korean Air.

"With our expanded partnership with Korean Air and the new terminal at ICN, we will offer the best travel experience to our customers who travel to and from Asian cities via Incheon Airport," said Matteo Curcio, Delta's Vice President - Asia Pacific. "We are working closely with Korean Air to build the most convenient hub in Asia, reducing connecting times and offering the best-in-class products at the new Terminal 2 at Incheon Airport."

Together with its partners at Korean Air, Delta successfully moved nearly 30,000 seat departures overnight into the new terminal, making this the largest joint terminal relocation in the airline’s recent history.

Delta is the only U.S. carrier operating nonstop flights between ICN and three U.S. gateway cities: Atlanta, Detroit and Seattle. Once fully approved, the airline’s new Joint Venture with Korean Air will give customers access to a seamless experience across an expansive, combined network, reaching more than 290 destinations in the Americas and more than 80 in Asia.