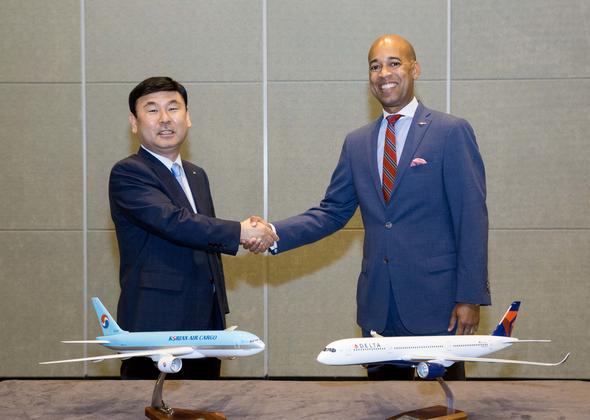 Delta Air Lines Cargo and Korean Air Cargo are launching new cargo cooperation to offer world-class cargo services across one of the most comprehensive route networks in the trans-Pacific market. This comes after the recent implementation of the trans-Pacific Joint Venture partnership between the two airlines.

“We are excited to partner with Delta to create an unrivalled air cargo network across North America and Asia. This is bolstered by Korean Air’s leading trans-Pacific air freight network, as well as Delta’s nationwide schedule and sales network within the U.S.,” said Samsug Noh, Senior Vice President, Head of Cargo Business Division, Korean Air. “I am confident that the partnership will further strengthen our capability to offer an unequalled expertise on all aspects of air cargo transportation.”

The joint venture routes, on which Delta and Korean Air carried 268 million tons of belly cargo in 2017, will allow customers to work with either carrier to transport shipments across a broad network of flights. The expansive combined network formed by this partnership gives Delta and Korean Air’s shared customers access to more than 290 destinations in the Americas and more than 80 in Asia.

The new joint venture builds on nearly two decades of close partnership between Korean Air and Delta; both were founding members of the SkyTeam global airline alliance.

Delta and Korean Air currently transport a diverse range of cargo products in the trans-Pacific market. From the U.S., semi-conductor production facilities, perishables and e-commerce shipments are some of the key products shipped to Seoul and throughout Asia. In the reverse direction mobile phones, automobile parts and other electronics are carried.

Earlier this year, Delta and Korean Air co-located into the new, state-of-the-art Terminal 2 at Seoul’s Incheon International Airport. This means substantially reduced connecting times for both passengers and cargo, and one-roof warehousing is planned for the airport as well. As one of the world’s largest airports, Incheon has among the fastest connection times in the region. It has been named among the best airports in the world for more than a decade by Airports Council International, as well as the world's cleanest airport and the world's best international transit airport by Skytrax.

We anticipate that Seoul Incheon will continue to grow as a major Asia gateway for Delta and Korean Air. From Seoul, Delta is the only U.S. carrier to offer nonstop service to three major U.S. gateways, including Seattle, Detroit and Atlanta, with service to Minneapolis launching in 2019. Korean Air provides the largest trans-Pacific air freight capacity.

Delta Cargo offers access to an industry-leading global network, reaching more than 310 destinations in 54 countries on six continents and carrying more than 2.2 billion cargo ton-miles each year. Whether it’s life-saving pharmaceuticals, organs for transplant, fresh flowers, asparagus, luxury cars or bulk shipments, Delta Cargo offers reliable shipping services with GPS and real-time tracking options. With an industry-leading Cargo Control Center for 24/7 proactive shipment monitoring and IATA’s CEIV Pharma certification, Delta has the best on-time performance of any U.S. airline. In 2018, Delta was named to Fortune’s top 50 Most Admired Companies in addition to being named the most admired airline for the seventh time in eight years. Additionally, Delta has ranked No.1 in the Business Travel News Annual Airline survey for an unprecedented seven consecutive years. Headquartered in Atlanta, Delta employs more than 80,000 employees worldwide and operates a mainline fleet of more than 800 aircraft. The airline is a founding member of the SkyTeam global alliance and participates in the industry’s leading transatlantic joint venture with Air France-KLM and Alitalia as well as a joint venture with Virgin Atlantic and Aeromexico. Including its worldwide alliance partners, Delta offers customers more than 15,000 daily flights, with key hubs and markets including Amsterdam, Atlanta, Boston, Detroit, Los Angeles, Mexico City, Minneapolis/St. Paul, New York-JFK and LaGuardia, London-Heathrow, Paris-Charles de Gaulle, Salt Lake City, São Paulo, Seattle, Seoul, and Tokyo-Narita. Delta has invested billions of dollars in airport facilities, global products and services, and technology to enhance the customer experience. Discover more at www.DeltaCargo.com.

Korean Air Cargo has the largest trans-pacific air freight capacity.  Korean Air has a global network of 123 cities in 43 countries, offering more than 460 daily flights to its customers. The airline has a fleet of 164 aircraft, including 25 freighters.