The sound of Mariachis welcomed customers to a gate area celebration for the launch of Delta’s non-stop service between Minneapolis-St. Paul and Mexico City last weekend. The flight was sent off with a traditional water cannon salute after airline and public officials highlighted the importance of the service for both business and leisure customers.

“The non-stop service between the Twin Cities and Mexico City represents an advantage to the business community as it allows for easy access to one of the most important business capitals in Latin America,” said Ben Humphrey, Delta’s Vice President - Airport Operations. “Furthermore, from the Mexico City International Airport, customers can access optimized connections to other important industrial and manufacturing centers like Monterrey and Leon.” 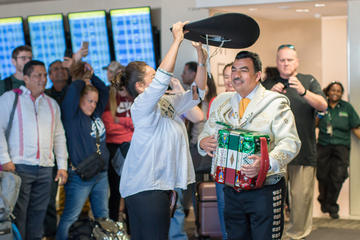 The route is served by Delta’s Airbus A319 aircraft with seating for 12 in First Class, 18 in Delta Comfort+ and 102 in the Main Cabin. Customers will enjoy large overhead bins, access to WiFi, free in-flight messaging on iMessage, Facebook Messenger and WhatsApp as well as free in-flight entertainment through Delta Studio.

Dan Boivin, chair for the Metropolitan Airports Commission, said direct service to Mexico City will benefit the local business community as Mexico City is the financial as well as the cultural center of Mexico.

“Mexico City is the largest city in Latin America. Having direct service creates more opportunities for Minnesota businesses and provides a much more convenient link between the Twin Cities’ Mexican-American population and their country of origin,” said Boivin.

Leisure customers received the new service with equal enthusiasm because the connection provides access to 41 cities in Mexico thanks to the partnership between Delta and Aeromexico. Among those popular destinations now available to customers connecting in Mexico City are beach markets like Cancun, Puerto Vallarta, Los Cabos and Acapulco.