Delta logs 100 days without a canceled flight, ahead of 2015 pace 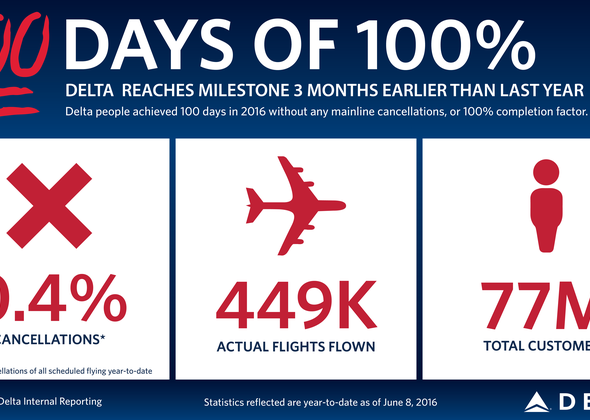 We’re not even halfway through the year and Delta is already on pace to beat last year’s record for days without a canceled flight.

With 161 days having elapsed in 2016 and 205 days remaining, Delta has already notched 100 days without a mainline cancellation, beating out last year’s 100-day mark by more than three months and setting up the airline to surge past its full-year 2015 total of 161 days without a cancel.

During the 100 days, Delta flew 77 million customers on 450,000 mainline flights. The strong operational performance in 2016 means roughly a quarter million fewer customers were impacted by a cancellation so far this year compared to last year as the airline continues its reliability rally.

In just two years, Delta has gone from a record 95 days with zero cancellations for the full year 2014 to doing more than that in just six months.

“I’m continually impressed at what the 80,000 people of Delta deliver day in and day out to make the experience better for our customers,” said Gil West, Delta’s Senior Executive Vice President and Chief Operating Officer. ”Our people are hitting it out of the park, delivering on our promise to be a safe and reliable airline and making canceling cancellations a reality.”

That reality means flying in the face of typical cancellation drivers like maintenance issues and the impacts of weather and air traffic control events. Just last month, Delta’s maintenance technicians concluded a month without a single maintenance-related cancellation.

Teams across the airline are continuing to find ways to navigate the challenges—expected and unexpected—of running a global airline to improve the operation and they’re leading the industry doing it. For the first three months of the year, the latest data recorded by the Department of Transportation, Delta had 58 days without a domestic mainline cancellation, more than American, Alaska, JetBlue, United and Southwest combined1. 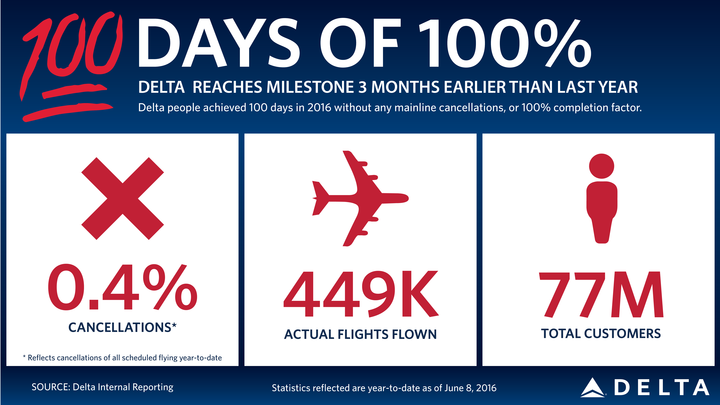 [1] Based on DOT Air Travel Consumer May 2016 Report statistics for March 2016 completion rate based on domestic flights scheduled, compared to all carriers reporting to the DOT.