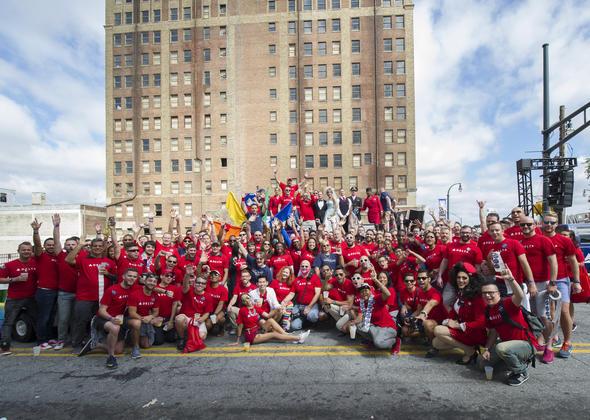 Delta, a long-time supporter of the Lesbian, Gay, Bisexual and Transgender (LGBT) community, celebrates Pride Month this June as an official airline sponsor of nine Pride festivals across the U.S. and Canada.

For several years Delta has teamed up annually with some of the largest regional Pride events around the world. Its 2016 partnerships include the Cadillac Barbie IN Pride Parade and Circle City IN Pride Festival in Indianapolis, LA Pride, the Nashville Pride Equality Walk, Motor City Pride in Detroit, NYC Heritage of Pride, Seattle PrideFest, Seattle Pride, Twin Cities Pride in Minneapolis, Utah Pride Festival in Salt Lake City and The 519's Green Space Festival at Toronto Pride.

Representatives of Delta's Employee Equality Network in each city as well as friends, family and volunteers will don Delta gear to march in the parades.

As part of this year's celebration, Delta is offering a special First Class and Delta Comfort+ fare sale on flights from many domestic airports to festival destinations in the U.S and Canada. First Class and Delta Comfort+ amenities include added legroom, complimentary beer, wine and spirits and complimentary Delta Studio entertainment. For details, terms, and applicable fees of the fare sale, visit delta.com/flyproud.

Delta is celebrating Pride month along with its hotel partner Starwood Preferred Guest (SPG®). SPG is offering a “Stay Proud” promotion that includes discounts up to 15 percent, and up to 20 percent for SPG Members, on hotel stays during June, July and August. All rooms must be booked between May 15 and June 30, and more details, including terms and applicable fees, can be found at spg.to/stayproud.

Like Delta, Starwood prides itself on its longstanding commitment to the LGBT community, with philanthropic partners such as the Human Rights Campaign, corporate advocacy initiatives promoting equal rights nationwide and LGBT-focused brand programs and hotel events. SPG also has an official LGBT company manifest promoting an inclusive environment where all associates, guests, customers, partners and community members are invited, embraced, valued and respected.