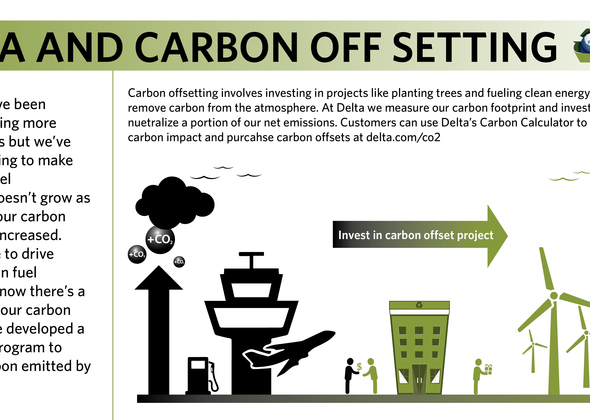 Delta is celebrating Earth Month this April by matching up to $25,000 in carbon offset contributions made by customers. 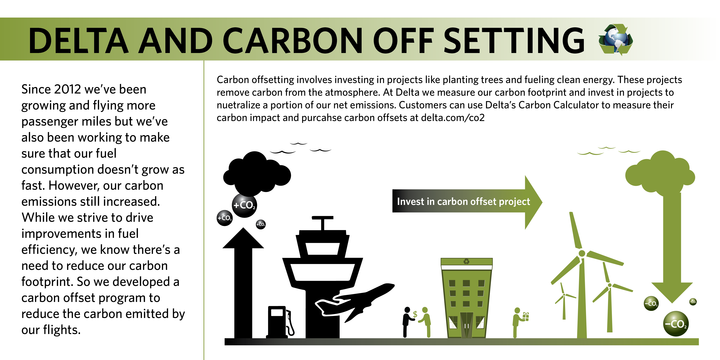 “Reducing our impact on the environment will improve the sustainability of our planet as well as our business,” said John Laughter, Senior Vice President – Corporate Safety, Security and Compliance. “Jet fuel is by far Delta’s biggest source of carbon emissions, making up more than 98.5% of our total carbon footprint. At delta.com/co2 customers can view the environmental impact of their travels and make a donation to support a carbon offset project that benefits the atmosphere.”

Delta met carbon-neutral growth goals in 2013 and 2014 by purchasing offsets. And Delta’s carbon offset program, launched in 2007 and the first offered by U.S. carriers, lets customers get involved. Travelers can compensate for their emissions by funding projects that reduce greenhouse gas emissions, like planting trees. Delta leaders even advocate for the program, choosing to offset their own travel.

How does it work?

To give it a try, I decided to offset my recent roundtrip from Atlanta (ATL) to New York (LGA). Upon visiting Delta’s Carbon Calculator, I was prompted to enter my confirmation number or the origin and destination of my trip; I opted for the latter, adding each segment.

My estimated carbon emissions for flying the 1,520 mile roundtrip were .279 metric tons of CO2 which could be offset for just $4.19.

With one click on “offset now,” I was redirected to the Nature Conservancy website, prompted to enter my gift amount and given the chance to support a cause of my choice. Options include: The Rio Bravo Climate Action Project located in northwest Belize, The Valdivian Coastal Reserve project in Chile’s southern coastline or the Clinch Valley Conservation Forestry Program in southwestern Virginia.

Born and raised in southwest Virginia, I opted to support the Clinch Valley Conservation program, a project quite literally close to home as the Clinch river runs along the my parent’s backyard.

Next I was prompted to pay with a credit card or via Paypal. And after submitting payment, I received an email confirming my contribution. The process took about two minutes, but less than five dollars later my offsetting was complete.

“With 180 million customers and 80,000 employees worldwide, small offsets can add up to a huge impact,” said Laughter. “Join Delta as we work to be a more sustainable business.”

Delta's carbon offset program is just one of the airline's efforts to effect positive environmental change. The airline has also moved to a model of sustainable sourcing for textiles, developed farm-to-tray-table meal service, built houses from the proceeds of the inflight recycling programand implemented numerous fuel-saving initiatives on the ground and in the air.