Delta has moved from Terminal 1 to the new Satellite Terminal (S1) at Shanghai Pudong International Airport. The relocation, alongside partner China Eastern Airlines, will create a more seamless and convenient connecting experience for customers.

"Delta is committed to continuously investing to improve customers' on-the-ground and in-flight experience," said Wong Hong, Delta's President – Greater China and Singapore. "This move is part of our broader strategy to collaborate with China Eastern to better address the growing needs of the U.S.-China market." 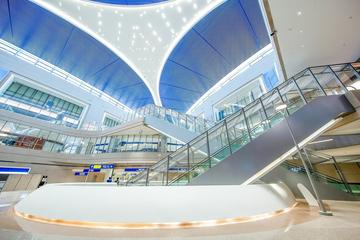 Delta customers departing from and arriving to Shanghai-Pudong will enjoy fast and seamless customs procedures, connections and boarding at S1. Check-in will take place at Terminal 1 with mass rapid transit system transfer to S1 around the clock. Customers will also enjoy s​hopping, dining and entertainment inside the satellite terminal building. China Eastern's new VIP lounges at S1 will be open to Delta One customers and SkyMiles Diamond, Platinum or Gold Medallion members. Moreover, Delta flights arriving at S1 can now park at the gate, so travelers no longer need to bother with remote parking, air stairs or bussing.

Delta operates nonstop daily flights between Shanghai Pudong Airport and four major U.S. gateways, including Detroit, Seattle, Los Angeles and Atlanta. Delta's partnership with China Eastern also gives customers access to over 1,350 codeshare domestic flights per week to more than 40 cities across China. By collocating at S1, Delta and China Eastern will give customers new convenience in both international and domestic connections.

Meanwhile, Delta service from Pudong to Atlanta will transition to the newly retrofitted B777 by early December. By then, all Delta service between Shanghai and the U.S. will be operated by the flagship A350, the new A330-900neo and retrofitted B777, all of which are equipped with next-generation Delta One suite and Delta Premium Select cabins.

The new satellite terminal building, known as S1 and S2, covers 620,000 square meters and is the largest structure of its kind in the world. The sprawling H-shaped terminal has 90 boarding bridges and connects with Terminals 1 and 2 easily via the mass transit system. With the opening of the new satellite terminal, the Shanghai Pudong Airport has the capacity to handle 80 million passengers annually.*