SALT LAKE CITY, Dec. 6, 2006 – Delta Air Lines this winter will continue building its Salt Lake City hub – one of the largest hubs in the West – with the addition of new nonstop service between Salt Lake City and Pittsburgh. The new service, effective March 1, 2007, will be the only nonstop service between the two cities, offering customers convenient flight options for business or leisure travel.

“Delta continues to compete on every coast and as part of our ongoing commitment to Salt Lake City and the customers flying through our western hub, we’re pleased to offer the only nonstop service to Pittsburgh,” said Bob Cortelyou, Delta’s vice president of Network Planning. “With the addition of new nonstop service to Pittsburgh and Charlotte in March 2007, Delta’s Salt Lake City hub will boast more than 340 flights to 111 destinations.”

Delta’s daily service to Pittsburgh will be operated by Delta Connection carrier SkyWest Airlines using the 70-seat Bombardier CRJ900 aircraft – offering an all-leather interior and two-class cabin with 10 seats in first class and 60 seats in economy.

Delta Air Lines (Other OTC: DALRQ) offers customers service to more destinations than any global airline with Delta and Delta Connection carrier service to 290 destinations in 46 countries.  With more than 50 new international routes added in the last year, Delta is America’s fastest growing international airline and is a leader across the Atlantic with flights to 28 trans-Atlantic destinations. To Latin America and the Caribbean, Delta offers more than 400 weekly flights to 49 destinations. Delta’s marketing alliances also allow customers to earn and redeem SkyMiles on more than 14,000 flights offered by SkyTeam and other partners. Delta is a founding member of SkyTeam, a global airline alliance that provides customers with extensive worldwide destinations, flights and services. Including its SkyTeam and worldwide codeshare partners, Delta offers flights to 445 worldwide destinations in 92 countries. Customers can check in for flights, print boarding passes and check flight status at delta.com. 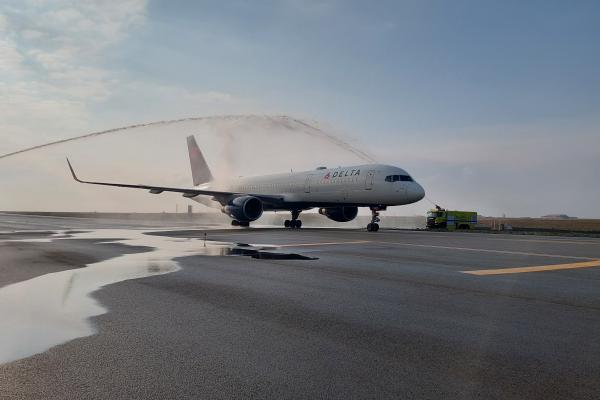